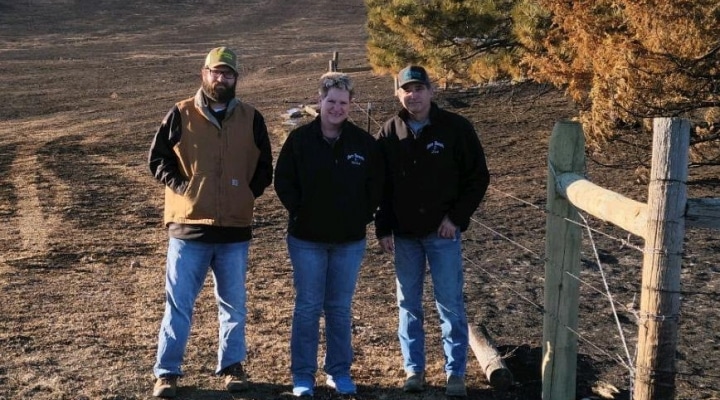 The Zorc family of Lemmon stand on what was pastureland. The Zorc ranch family was among many Perkins County South Dakota cow/calf producers to lose pastureland and cattle to the January 14 Windy Fire. The family stands next to new fence friends and local businesses helped put in after the fire destroyed acres of fenceline. Left to right: Preston, Kathy and Joe. To donate funds or a load of hay to producers impacted, visit www.sdfu.org. (Courtesy Photo)

HURON, S.D. — A day after the Windy Fire consumed more than 2000 acres of owned and leased winter and spring pastureland, and 1500 round bales on the Ham Ranch, friends, neighbors and even some strangers began showing up ready to fence.

“They came for a week straight. A bunch of guys showed up without asking, to help fence. Some of my friends said, ‘we wouldn’t tell you we were coming because you would have told us to stay home.’ You know, they are right,’” shared Brady Ham, a fourth-generation Shadehill rancher. “We are all done fencing now.”

In addition to helping replace fence destroyed in the fire, many donated hay. “It is humbling because hay, in this country, is a commodity that a guy doesn’t want to let go of. One young man hauled a load in from as far away as Brookings,” Ham says. “I felt pretty helpless in that fire, and it is pretty humbling when people help out. It was quite the experience. I would not want to do it again, but I sure learned how generous and gracious people are.”

Lemmon rancher, Joe Zorc understands what Ham means. “We are the kind of people that don’t really want help. But when help comes, it sure is nice,” Zorc’s voice tapers off as he is overcome with emotion recalling the donated loads of hay, fencing supplies from Lindskov Implement and a crew from Boldt Power who showed up to dig in corner posts after the Windy Fire destroyed 1800 acres of his summer pasture.

“When they first come, we told them we didn’t need their help, we could do it ourselves. They said, “we are here. We will not take “no” for an answer. Show us where to start,” says Zorc, who ranches with his wife, Kathy and son, Preston.

Kathy says the generosity could not have come at a better time. Their daughter, Kaylee got married two days after the fire. “They brought a meal out for us. I wanted to say, “we didn’t need it. We will be OK.” But when life is overwhelming it is nice to have a hot meal.’” Friends also helped decorate for the wedding. “Thank God for good friends. We are blessed in many ways, let me tell you.”

The Zorc and Ham ranch families were among many Perkins County South Dakota cow/calf producers to lose pastureland and cattle to the January 14 Windy Fire.

Propelled by gusts of 60-up to-90-miles-per-hour, the prairie fire burned across 21 miles of Adams County, North Dakota and Perkins County, South Dakota.

“It is amazing no houses or lives were lost,” explained Lemmon Volunteer Fire Chief, Chad Baumgarten.
Serving on the Lemmon Volunteer Fire Department for nearly 30 years, Baumgarten says he and the crew see about 20 grass fires a year. Most are during the summer months and most are started by haying equipment or lightening. The Windy Fire, he says was unlike any fire they have seen in their area for several reasons.

“We have had winter fires before, but most of the time there’s snow on the ground to help stop it. This fire was different,” Baumgarten says. “There wasn’t any snow and because it was January, all the grasses are dead, brown and it was extremely windy.”

Fighting a fire like this one was personal for many volunteer fire fighters. Most volunteers are like Baumgarten. They ranch fulltime. And the rangeland they were fighting flames on could just as easily be their own grassland they depend upon to feed their own cattle. The cattle they worked to move to safety that smoky night, could just as easily been carrying their brand.

“It is scary. I was loading my neighbors with water and supplies to fight the fire, then I watched them literally drive back into the wall of smoke and flames. They are my neighbors and my friends,” explained Thunderhawk rancher, Chad Odell.

Ham believes it helped that many of the volunteers fighting the fire on his land had been there before. “The guys knew where the heck they were. Some of the guys had been on my place to help me move cattle before. The fire chief is one of my best friends,” Ham explains.

The fire hit Perkins County around 4:30 p.m. It raged through the night. Firefighters were not only fighting fire, they also had to deal with freezing temperatures in the low teens and frozen equipment.

After the fire was over, family and neighbors who had been fighting the fire throughout the long night, stuck around as Ham assessed the damage.

The fire ran through a pasture of bred heifers. More than a dozen had to be put down. Ham thought for sure the fire had also gotten to a large group of fall-calving cows and calves. “It burned right through their pasture, but they got into the creek and trees and none of them were hurt. My cousin and his dad checked on them after the fire and called to tell me they were all right. It was relieving.”

After the fire was contained, some of the volunteer fire fighters stuck around to help Ham clean things up. “I would not have wanted to be by myself that night. I owe them.”

Many of the same neighbors who fought the fire, returned to help Ham fence.

Here’s how you can help
Even though Dave Reis ranches more than 260 miles from Perkins County, the Lyman County rancher is donating a load of hay to help. “It’s just natural, isn’t it? I could see myself in their situation very easily. A prairie fire comes running through your land and wipes you out. I just wanted to do something to help.”

He donated his load of hay through South Dakota Farmers Union (SDFU) website. The state’s largest family farm and ranch organization is one of the groups working to connect those impacted by the Windy Fire with resources to help.

“Helping neighbors in need is just what you do,” explains Doug Sombke, a fourth-generation Conde crop and cattle producer and President of SDFU. “As a producer more than 200 miles away, I felt a bit helpless. This allows me and others to do something, whether it is a donation of money, hauling hay or donating a load of hay.”

To learn about how you can help, visit www.sdfu.org. 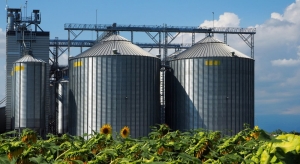 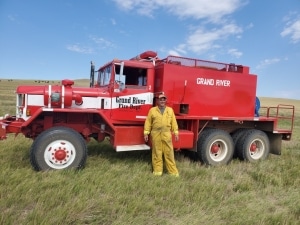 HURON, S.D. — January’s Windy Fire was an early and sad start to Fire Season 2021, and a reminder of the important role volunteer fire departments play in rural communities across South Dakota. So, who are the individuals who make up these volunteer departments? And why do they set aside time for trainings, meetings and […]