Michigan farmers planted fewer corn acres and more soybean acres in 2021 than they did in 2020. (United Soybean Board via Flickr)

EAST LANSING, Mich. — Michigan farmers planted fewer corn acres and more soybean acres in 2021 than they did in 2020. The 2021 planting season was very favorable with good field conditions throughout April and May. Late frosts in May did necessitate some replanting, though this was easily accomplished. Even with replants, farmers in Michigan completed corn and soybean planting much more quickly than normal. Michigan corn growers planted 2.25 million acres, down 100,000 from last year. Harvested acres of corn for grain were set at 1.89 million acres, also down 100,000 from last year. 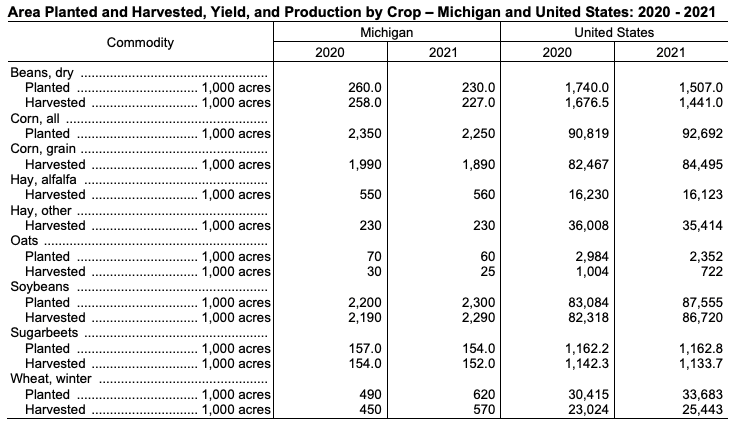 Michigan’s 2021 winter wheat production is forecast at 43.9 million bushels. This report is based on conditions as of July 1, 2021. Some highlights of the Crop Production Report follow:

The Michigan winter wheat yield is forecast at 77 bushels per acre, down 3 bushels from the previous month but up 2 bushels from last year. As of June 27, twenty percent of the crop was mature, 3 points above the 5-year average. Generally, the crop was in good shape with 59 percent of the crop rated in good to excellent condition compared with 62 percent at the same time last year. Farmers report reduced yield projections from the June 1 forecast due to very dry weather during grain fill.

Oat yield in Michigan is forecast at 53 bushels per acre, down 2 bushels from last year. As of June 27, forty-six percent of the crop was rated in good to excellent condition, compared with 81 percent last year. The crop was 61 percent headed on June 27, sixteen points above the 5-year average.

Received an ag labor survey? Here’s why you need to fill it out
October 24, 2021