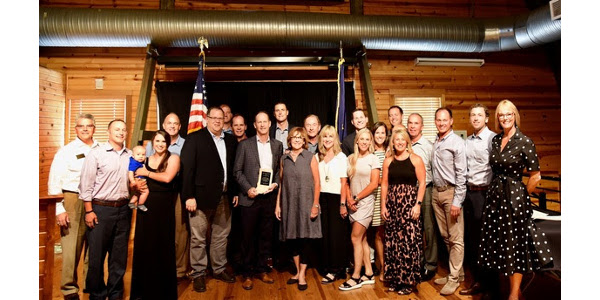 INDIANAPOLIS — At the Indiana State Fair, Lt. Governor Suzanne Crouch presented the AgriVision Award to the Jerry Seger Family, and Tim and Jim Craig with James Allen Insurance. Now in its 12th year, the award recognizes members of Indiana’s agricultural community for demonstrating vision, innovation and leadership in their field.

“It was an honor to present Jim and Tim Craig and the Jerry Seger family with the AgriVision Award,” Lt. Gov. Crouch said. “Their vision has shaped the foundation of this great industry, and not just statewide, but nationally and globally. We would not be where we are today without their leadership.”

Jerry Seger started the family farm in the 1950s, buying out his father’s feed mill in southwestern Indiana. His vision was to create a feed business for chickens and turkeys, which later evolved into owning those flocks, as well as the eggs they produced. Eventually, his operation expanded, as he began marketing the chickens, turkeys and eggs he owned.

With eight sons, Jerry wanted to build a family business. Over the next 60 years, the Jerry Seger family expanded into two parts: Wabash Valley Produce Inc. and Farbest Foods Inc.

Wabash Valley Produce Inc. processes 7 million eggs a day, which are sent to three different facilities to be converted into egg whites or egg yolks. With locations in Huntingburg and Vincennes, Farbest Foods Inc. raises, feeds and processes approximately 60,000 turkeys per day, which are sold mainly in the U.S., but also around the world. Combined, these businesses provide jobs for 2,000 employees.

After Jerry passed away in 2003, his sons carried on the family business and his traditions. Today, the Jerry Seger family is known for their leadership in environmental stewardship, farm safety, animal welfare and innovation in the poultry sector. They are also active members of their communities and support Indiana farmers by sourcing their grain locally.

“Indiana’s agricultural strength comes from the values, ingenuity and perseverance of Hoosiers,” said Bruce Kettler, Indiana State Department of Agriculture director. “These recipients have dedicated their lives to moving the industry forward and supporting their communities, and it was a privilege to honor their legacy today.”

James Allen Insurance is a family-owned business located in Carmel, Ind. that is headed up by Tim Craig, CEO, and his father, Jim, who serves as the chief underwriting officer and chairman of the board.

Beginning in 1999, Tim was inspired after his father developed a farm pollution policy to create the underwriting division of the business with the mission to offer unique coverage plans for the farming industry. Over the past 25 years, James Allen Insurance developed numerous proprietary products designed to provide farmers with protection from unpredictable events.

In addition to underwriting services, the company creates, develops and writes insurance programs and policies for areas of coverage that are new to the general marketplace. Valuing innovation, they provide solutions for unique industry needs and were the first business to develop policies in several areas, including Porcine Reproductive & Respiratory Syndrome, Porcine Epidemic Diarrhea Virus, Foot and Mouth Disease, African Swine Fever and Avian Influenza.

The individuals at James Allen Insurance work with farmers in 47 states to create personalized policy plans for their operations. Under Tim’s leadership, the company has become a pioneer in underwriting that supports the agricultural industry in Indiana and nationwide.

For more information about the AgriVision Award, please visit www.isda.in.gov. Click here to see photos from the Celebration of Agriculture.