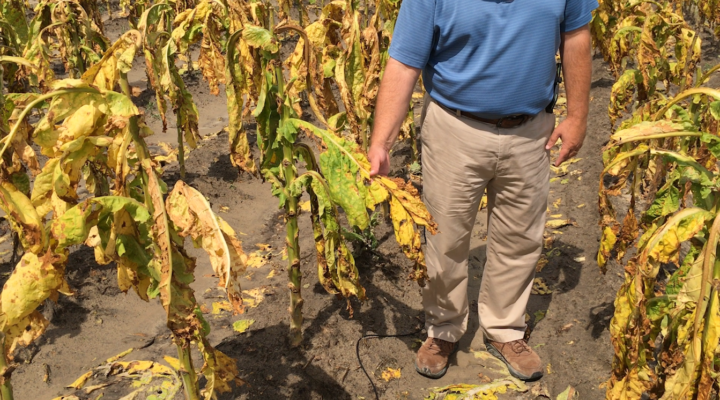 SMITHFIELD, N.C.–Extension Agents with NC Cooperative Extension have assessed crop damage in Johnston County.  Several crops have sustained significant damage with Flue-Cured Tobacco leading the way at this time.  At the time of the storm, tobacco growers in Johnston County had varying amounts of tobacco left in the field.  Some growers had as much as 60% of their weight still in the field, while others were nearing completion of harvest.  Everyone should keep in mind that the days of finishing tobacco harvest in August are long gone.  Tobacco growers utilize their expensive equipment to the maximum capacity to take advantage of the frost-free period in North Carolina that lasts from mid-April until late October.

So, in today’s time it is completely normal for tobacco to be in the field in October.  We are estimating that approximately 40% of the total crop was still in the field at the time of Hurricane Florence.  It is pretty clear now that the majority of that tobacco will be lost.  The Johnston County crop was 9,353 acres with a potential total value of $45 million dollars.  While less than one-half of the weight was in the field, that is still more than one-half of the value because the upper stalk leaves have the highest value.

The cotton crop in Johnston County has also sustained significant damage. While official USDA acreage numbers are not available, Johnston County growers typically plant around 5,000 acres of cotton. Damage to the cotton crop includes lint quality reductions due to wet conditions, lint staining, and seed sprouting in the boll.  In addition, a good portion of the lint in open bolls has fallen from the bur onto the ground, and some cracked bolls are experiencing hard lock and boll rot which further reduces yields. In a typical year, the cotton crop in Johnston County would be valued at around $3.4 million. It is quite possible, even likely that one-third of this value will be lost.

The corn crop in Johnston County is a better story.  Fortunately, growers took advantage of good conditions prior to Florence and approximately 60% of the corn crop was already harvested.  The remaining 40% is damaged with some stalks blown down and potential for reduced grain quality. Grain yields of the remaining unharvested corn will be reduced by an estimated 15-20%.  In a typical year, farmers plant 10,000 acres of corn in Johnston County with a total value of $5 million.

In 2018, Johnston growers also planted around 8,500 acres of sweet potatoes. Before the storm hit growers had started digging potatoes and it is estimated that 10% were already harvested.  While wind causes little damage to sweet potatoes excess rainfall and soil moisture near harvest time can be detrimental. There can be concern of potatoes rotting in the field prior to harvest, thereby reducing yields.  This concern is mostly in wet fields and depressions that hold standing water. It is too soon to estimate the potential outcome for the sweet potato crop. It is also too early to determine potential losses to peanuts which will experience delayed harvest due to wet soil conditions.

While soybeans have sustained some damage due to lodging and wet conditions, it is expected that losses for this crop will be fairly minimal except where fields were flooded.

It is important to note that farmers in Johnston County grow many acres of specialty crops like vegetables, pumpkins, industrial hemp, pepper, squash, greens, collards, nursery, greenhouse, etc.  In addition, livestock and poultry operations sustained some damage to facilities, losses of hay, and damage to fences.

Farmers are strongly encouraged to report ALL agricultural damage to the USDA Farm Services Agency in Johnston County.  Documentation of all losses and any work to repair or restore damaged property is necessary.

While the total damages to agricultural interests in Johnston County are still being determined by USDA officials, it is very likely that losses from Florence will exceed $17 million in Johnston County when compared to a typical production year.  Some, but not all of these losses may be covered by crop insurance or other assistance programs.

Not all calf milk replacers are created equal

NCDA&CS moving into communities to assess damage & assist in recovery