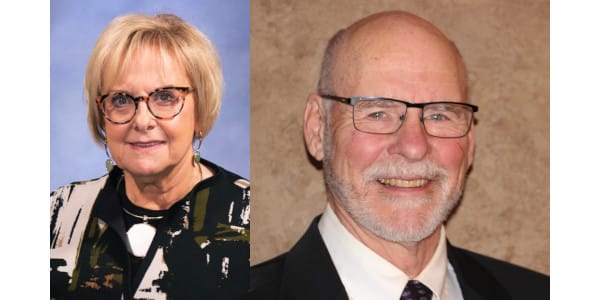 KANSAS CITY, Mo. — The Agricultural Business Council of Kansas City will honor two of the region’s leading agricultural figures on August 18 at a luncheon in the Chamber Board Room in Kansas City’s historic Union Station. The honorees will receive the Council’s highest award, the Jay B. Dillingham Award for Agricultural Leadership and Excellence.

Agricultural Business Council Chairman Greg Krissek notes the honorees are champions for agriculture in separate but very key areas in the region. The honorees are:

Diane Olson – Missouri Farm Bureau. Olson recently retired as MOFB’s Sr. Director of Promotion and Education after a 34-year career there. Regarded by colleagues as a “rockstar” in her profession, she is a native of Stone County in Southwest Missouri. She learned the value of hard work and the importance of customer service in her family’s general store. Following graduation from Reeds Spring High School, she earned her B.S. degree from Southwest Missouri State University (now Missouri State University). While working as a Child Development Specialist for the University of Missouri Extension Service, she earned her M.S. degree from the University of Missouri She began her Farm Bureau career in November 1985 and has been a state and national leader in promoting agriculture in new and innovative ways ever since. In 2005, she secured a federal grant to develop a series of extremely popular Agricultural WebQuest, an online agricultural learning activity for users anywhere in the world. For 28 years she coordinated the Health and Safety exhibit at the Western Farm Show and she is a fixture at American Royal events each year. She was a founding member of the Board of Directors of the Agricultural Business Council of Kansas City and makes annual visits to classrooms in the Kansas City metro area. She coordinated Missouri’s Agriculture in the Classroom Program; served as president of the National Agriculture in the Classroom organization; hosted three National Agriculture in the Classroom Conferences, two of which were held in Kansas City; administered Missouri Farm Bureau’s (MOFB’s) education mini-grant and scholarship programs; and led the organization’s outreach efforts during the Missouri State Fair. The ultimate professional, whether in a 2nd grade classroom, a teacher workshop or a Congressional briefing, Diane Olson’s leadership has made a difference and her dedication to agriculture made her a worthy recipient of the prestigious Jay B. Dillingham Award.

Ralph Richardson – Kansas State University. Dr. Ralph Richardson served as dean and CEO of the K-State Olathe campus for four years after serving as dean of the College of Veterinary Medicine at Kansas State University from 1998-2015. He graduated from Kansas State University’s College of Veterinary Medicine in 1970 and served as a Captain in the United States Army Veterinary Corps for two years. He completed an Internship in Small Animal Medicine and Surgery at Purdue University and a Residency in Small Animal Internal Medicine at the University of Missouri-Columbia. After a year in private practice in Miami, FL, he returned to Purdue for 22 years. At Kansas State University, Dr. Richardson was instrumental in establishing legislation that provided debt forgiveness to new veterinary graduates who serve the Kansas livestock industry. He was a member of the inaugural Board of Directors of the Kansas City Animal Health Corridor, and he facilitated the creation of numerous programs at K-State such as the Beef Cattle Institute, the Center for Vector-borne Diseases, the expansion of the Kansas State Veterinary Diagnostic Laboratory, and the building of the National Bio- and Agro-Defense Facility. Dr. Richardson received the animal health industry’s lifetime achievement award, the Iron Paw Award in 2015, and the Association of American Veterinary Medical
College’s Recognition Lecture award in 2016. Dr. Richardson has had a life-long commitment to agriculture, particularly the livestock industry. He was active in 4-H and livestock showmanship from grade school through college. Throughout his professional life he has championed the importance of safe food production, animal welfare, animal health, and public health.

“These individuals have had a positive and lasting effect on our community,” said Council Chairman Krissek. “They are strong examples of what being an advocate for agriculture can accomplish.”

The event will be held at the Chamber of Commerce Board Room in Union Station beginning at 11:30 a.m. for networking followed by lunch at noon. Visit www.agbizkc.com for more information and to register to attend.