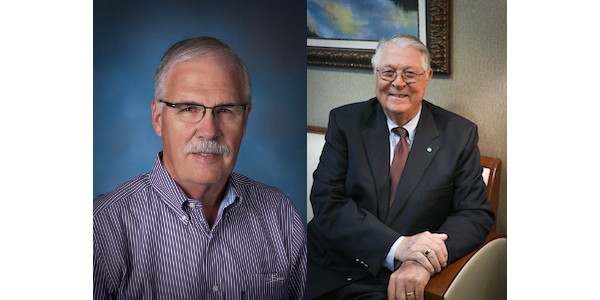 KANSAS CITY, Mo. — The Agricultural Business Council of Kansas City honored two of the region’s leading agricultural figures on May 16 at a luncheon in the Chamber Board Room in Kansas City’s historic Union Station. The honorees – Lee Borck, chairman of Innovative Livestock Services (ILS) and Beef Marketing Group Cooperative (BMG) and farm broadcasting legend Gene Millard of Millard Family Farms – received the Jay B. Dillingham Award for Agricultural Leadership and Excellence, the Council’s highest recognition. Both men have each left their marks on the ag industry over careers extending nearly 50 years.

Council Chairman Robert Thompson, a partner and co-leader of Bryan Cave Leighton Paisner LLP’s Food & Agribusiness Industry Group, described this year’s Dillingham Awards recipients as strong examples of what being an advocate for agriculture can accomplish. “These individuals have had a positive and lasting effect on our community.”

Lee Borck was introduced as “an industry icon” by Dee Likes, himself a Dillingham Award honoree in 2015. In his remarks as he accepted the award, Borck said real success in any business endeavor involves doing the right things and ensuring benefits from accomplishments touch everyone in the community. He also stressed that American agriculture has to better tout its accomplishments to the world and will need to adjust its messaging to reflect that it is no longer a commodity industry but a branded one that deserves equitable pricing for the value it creates.

Gene Millard offered a similar assessment of agriculture saying most consumers have a gross underestimation of the value crop growers and livestock producers provide. “Agriculture is a value-added business,” he pointed out, “nothing comes off the fields without a farmer having added value to it.”

Opening the program, John Dillingham, son of Jay B. Dillingham, told Council members that the Kansas City region, situated as it is on the Missouri River, flowing into and from the Mississippi and Kaw Rivers, and connected to coastal ports via rail and highway has an opportunity to become the Silicon Valley of agriculture.