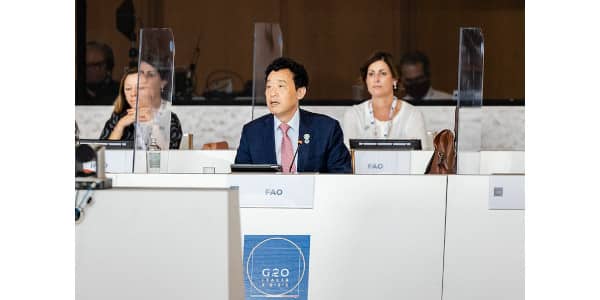 FLORENCE — Leaders of the G20 countries must continue to support the smooth functioning of global agri-food systems, which faces ongoing challenges from the effects of the COVID-19 pandemic, QU Dongyu, Director-General of the Food and Agriculture Organization of the United Nations (FAO), said in remarks opening the G20 Agriculture Ministers’ Meeting in Florence, Italy.

Qu hailed the G20’s pivotal leadership role over the past 18 months in mitigating the effects of the pandemic on the sector. “I can confidently say that our collective efforts kept agri-food systems open and trade flowing,” he said.

Yet challenges persist, notably due to how the pandemic has “expanded existing inequalities,” he said, citing the International Monetary Fund’s estimation that the per capita income loss for emerging markets and developing economies has been two and a half times the proportion of those in advanced economies; as well as FAO’s assessment that food insecurity has risen from 8.4 percent to around 9.9 percent of the world’s population.

FAO’s Director-General stressed that there is clear evidence that “agri-food systems are key to reducing these inequalities, especially in rural areas.”

He also emphasized the continual emergence of new and complex crises, citing the cases of Afghanistan and Haiti, appealing to G20 members and other donors to provide swift support to farmers in troubled regions. FAO has launched an appeal for $36 million in urgent short-term immediate assistance to ensure Afghan farmers do not miss more of the upcoming winter wheat planting season.

Qu showed the ministers  at the meeting a brief video message from Thomas Pesquet, a French astronaut and  FAO Goodwill Ambassador who is currently on the International Space Station, in which the Director-General asked Pesquet to share his thoughts with the G20 ministers.

At a joint press conference with Qu, Italy’s Agriculture Minister Stefano Patuanelli pointed to his country’s $10 million contribution to the Food Coalition, an Italy-initiated, FAO-hosted strategy that the Director-General described as a “flexible coordination mechanism which allows us to build an inclusive alliance of partners and stakeholders together in response to specific country needs.”

He also hailed the potential of new technologies to help “reconcile contradictions” and produce more food for more people while using fewer natural resources. “It depends on us. We have to believe in this: we have to start acting. Words are not enough. Meetings are not enough. We need concrete actions by the governments,” Patuanelli said.

The Director-General thanked Italy, noting the long-term generosity of the government, the people and the city of Rome in hosting FAO for 70 years. “Italy walks the talk,” Qu said.

The Italian G20 Presidency is hosting the two-day meeting, which focuses on the sustainability of agricultural and food systems.

Prior to this event, preparatory meetings by Agriculture Ministry officials exchanged insights on the role of research and innovation and the necessity of sharing technological knowledge as tools to boost resilience, as well as new breeding techniques and the prospective role of digital traceability. Italy organized two scientific workshops, one on antimicrobial resistance and one on agriculture and climate change.

The FAO Director-General commended Italy’s G20 Presidency for constructive efforts throughout 2021 and pushing food security higher up the agenda, as underscored in the Matera Declaration.

Qu also pointed to reforms of FAO itself under his leadership, including a new Strategic Framework 2022-2031 built around the “Four Betters”: Better Production, Better Nutrition, a Better Environment, and a Better Life – and geared to accelerate all of its expertise and human capital to enhance FAO’s work as a professional, knowledge and innovative agency.

FAO stands ready to support Members in the transformation of agri-food systems and to achieve the Sustainable Development Goals, he said, urging the G20 Agriculture Ministers to accelerate the pace of progress by agreeing on the importance of G20 cooperation, responsible and targeted investments, One Health, research and innovation, and open global agri-food trade flows.