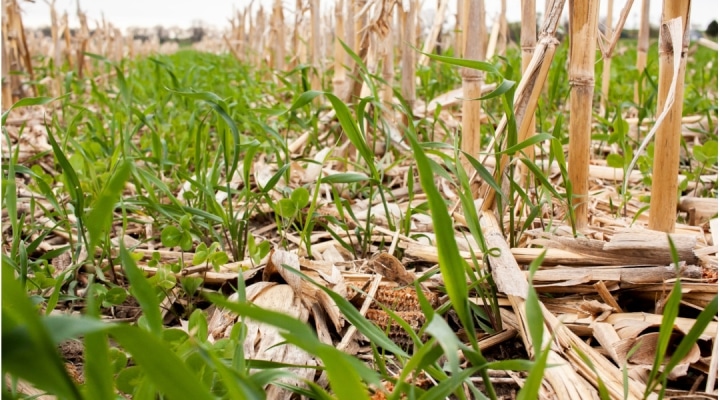 Now that the halfway point of the Western Lake Erie Collaborative agreement has been reached, has progress been made? Ohio Farm Bureau’s Director of Water Quality and Research, Jordan Hoewischer, has no doubt. (Indiana State Department of Agriculture)

COLUMBUS, Ohio — In 2015, the state of Ohio committed to reducing nutrient loading into Lake Erie by 40% by 2025. This commitment was made as part of the Western Lake Erie Collaborative agreement, which includes similar pledges from Michigan and Ontario, Canada.

Now that the halfway point of this agreement has been reached, has any progress been made? Some of Ohio agriculture’s biggest critics have said that nothing has been done to reach the goals set in this agreement, but Ohio Farm Bureau’s Director of Water Quality and Research, Jordan Hoewischer, said those comments couldn’t be further from the truth.

“To say that there has been zero progress or nothing done is very disingenuous and is a gripe that needs to be updated,” Hoewischer said. “Since 2015, the state passed two Senate bills (SB1 and SB150) that addressed parameters for applying nutrients, including who applies those nutrients and when and where they can be applied, addressing many factors that we know contribute to nutrients escaping farm fields.”

Add to that the expansion of the use of conservation efforts, like cover crops, by 50% since 2012 and the H2Ohio initiative, that has enrolled 1 million acres and nearly 2,000 farmers to do more and better nutrient management practices in the critical Maumee River Watershed that feeds into the Western Lake Erie Basin.

“We are seeing real scientific data that shows that the level of dissolved reactive phosphorus, which is the main culprit of Lake Erie’s algal blooms, is steadily declining over the past five years,” Hoewischer said. “Technology and education are also playing roles in this promising data as we are seeing fertilizer application rates going down as well.”

Even though the agreement to reduce nutrient loading by 40% was established in 2015, Ohio farmers have been working on their water quality efforts for decades. According to Heidelberg University’s National Center for Water Quality Research, data suggests that watershed scale changes in agriculture actually have had a reduction in particulate phosphorus of up to 40% from the 1970s to today.

The outlying factor, as it always is in agriculture, is the weather.

“The science is saying that in the past 30 years we are getting 50% more, 1-inch or more rains. We are losing five suitable field days in the spring and five in the fall, and farmers are having to change not only the way they farm, but also how they manage their nutrients,” Hoewischer said. “They are using new ideas like interseeding cover crops, applying manure to standing corn and using new technologies that are dodging the effects of weather the best they can. Those are the types of things farmers are doing to stay in line with water quality efforts and work around the ever-changing challenges from Mother Nature.”

Hoewischer said he is confident that the trends being seen in dissolved reactive phosphorus will help Ohio reach the 40% reduction goal by 2025.

“But I’m not confident that even if we do meet it, some people will not be satisfied with how Lake Erie acts and looks,” Hoewischer said. “Even now with robust fishing activity, some still claim the lake is unhealthy. It is a very healthy lake; it just has a pimple every so often, and we will continue to do as much as we can to reduce that.”