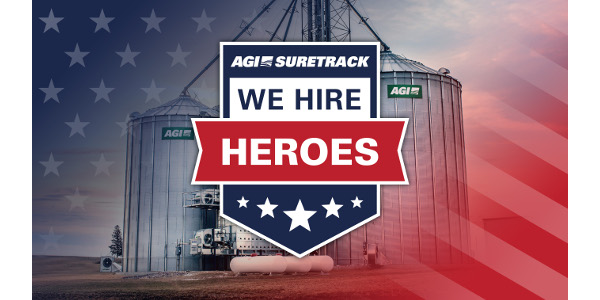 Not entirely new to the AGI SureTrack recruitment model, the company has recruited vets to fulfill BinManager® installations for the past three years. The model has been successful and, to date, the install team consists of over 90% military veterans.

With the launch of the We Hire Heroes campaign and the on-boarding of a full-time We Hire Heroes recruiter, the company will source talent from all branches of military service for all sectors of the AGI SureTrack company.

Gordon Obermueller, Lt Col (Ret.) joined the AGI SureTrack team as the company’s first veteran recruiter in late August and has spent the past two months scouting the country looking for additional veterans to join the BinManager install team. Recently, Obermueller has begun to recruit for open positions on the customer service, engineering and production teams, as well. For additional information on the We Hire Heroes program, as well as the calendar of Gordon’s recruitment events, follow the AGI SureTrack We Hire Heroes blog and SureTrack Heroes social media outreach. The blog and social media will be launched in conjunction with the We Hire Heroes program on Monday, November 11th on the following channels: Facebook, Twitter and LinkedIn.