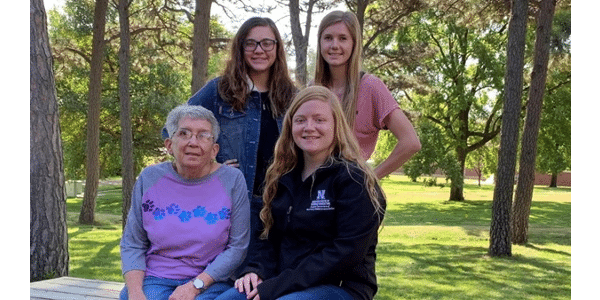 CURTIS, Neb. — An annual scholarship honoring a former Curtis educator will be available in January to two students at the Nebraska College of Technical Agriculture.

The Glenn Jurgens Memorial Scholarship of $500 per semester recognizes Professor Jurgens, who taught at NCTA and its predecessor institutions of UNSTA and UNSA. He was a significant influence for one of his former students, George Garlick.

Garlick is a McCook native who attended the regional high school in Curtis and graduated in 1954. He was able to go on to college through the encouragement by Glenn Jurgens when his teacher helped secure work study funding at Hastings College.

Decades later, after earning his doctorate in electrical engineering, becoming an educator, author, inventor and businessman, Garlick wanted to honor Professor Jurgens by establishing scholarships at NCTA through the University of Nebraska Foundation.

George and Carol Garlick reside at Richland, Washington, and continue to support Nebraska students with the NCTA scholarship program.

Academic standing and financial need are among criteria for scholarship recipients, said Jon Schroeder, local representative for the Garlicks.

Schroeder coordinates the scholarship selection with NCTA administrators and a scholarship committee which includes Pam Jurgens, a Curtis resident who is the daughter of Glenn Jurgens.

Three recipients were awarded a $1,000 scholarship for the semesters of the 2019-20 academic year. Recipients in September 2019 were Tiffany Dickau of Elwood, Jenna Garver of Hastings, and Anna Whyman of Palmyra.

Dickau is a double major in diversified agriculture and agribusiness who will be graduating in December. She has accepted a position in crop scouting with a company at Emmett, Nebraska. Her scholarship for $500 was renewed this fall, for her final semester at NCTA.

Garver graduated in 2020 with an associate degree in veterinary technology and a certificate in animal care. In July, she passed her national boards and is a licensed veterinary technician at Nebraska Animal Medical Center in Lincoln, where she had served her student internship. She was offered a fulltime position there last spring.

Whyman, a 2020 graduate in Agricultural Production Systems, currently resides in Curtis and is working on an online bachelor’s degree in agribusiness through Chadron State College. Whyman has continued to be active with the NCTA Stock Dog Club and works part-time at NCTA.

The Garlicks established the Jurgens scholarships for Nebraska students who are pursuing a degree in any agriculture-related field of study at NCTA. Any Nebraska resident who is enrolled to be a fulltime student next spring is eligible.

Freshmen and sophomore students are eligible, which includes transfer students or incoming freshmen in January 2021. Application forms are available now from NCTA Financial Aid or through the NCTA Dean’s Office.

Recipients may renew the scholarship for a second year by maintaining a 3.0 GPA. Applications are due on Dec. 4, and must include a high school or college transcript, and a personal essay.

Dr. George F. Garlick is the co-founder and serves as chairman of the board of Advanced Imaging Technologies, Inc. He has a Ph.D. in Electrical Engineering and Solid-State Physics from Iowa State University. In addition to his research, Garlick has held graduate level teaching posts at University of California at Los Angeles (UCLA), the University of Washington, and Washington State University.

The Garlicks have been contributed numerous gifts to NCTA and the Curtis community including donation of the George and Carol Garlick Aggie West Residence Hall, and funding for the construction of Aggie Central Residence Hall.

Part of the University of Nebraska system, the Nebraska College of Technical Agriculture is a two-year institution with a statewide mission of preparing students for successful careers in agriculture, veterinary technology and related industries. NCTA is known for its affordable tuition, high job-placement rate for its graduates, and for the success of student teams in numerous competitive activities including crops judging, ranch horse events, livestock judging, shotgun sports, stock dog trials, and intercollegiate rodeo. The college is consistently ranked as one of the best two-year schools in the nation.

How a box-to-box seed treater works