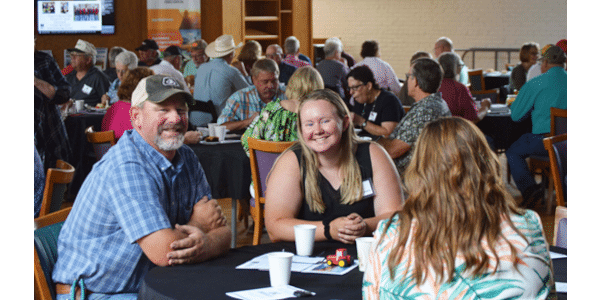 Mike and Allison Wilkins of Gibbon were among 102 attendees at the 2021 Aggie Alumni Day. Mike is a 1995 agribusiness alumnus and Allison will graduate in May of 2022, in agronomy. (M. Crawford / NCTA News)

“We had a terrific turnout to help our alumni celebrate 108 years in Curtis,” said David Fulton of Pleasanton. “Everyone really seemed to enjoy the daytime event, and a chance to get out and socialize again on campus.”

A 1980 graduate of agribusiness management, Fulton is now president of the Aggie Alumni Association, which represents high school and college eras from opening on September 9, 1913, to current day.

Fulton advanced from president-elect to president, receiving the gavel from Ann Ramm Bruntz of Friend, a veterinary technician alumna from the Class of ’71.  She had completed her term and celebrated with 23 others who returned to campus for their 50-year celebration.

“We definitely had a great time getting together again, with most of us spread throughout the state,” said Bruntz. “We enjoyed this chance to gather again after the pandemic halted our alumni reunion plans in 2020.”

The noon luncheon attracted several of the older alumni, many who live in southwest Nebraska or near enough to drive into Curtis.

Everett Calkin, now of North Platte, attended his first three years at Maywood High School, graduating from the Nebraska School of Agriculture in 1945.

Paul Coder of Wellfleet, class of ’46, was joined by his son, Mike Coder and daughter Nancy Schmitz.

An honoree who was unable to attend, unfortunately, was Wilfred “Buzz” Cole, a graduate of ’44 and then, instructor. He received a plaque for alumni service.

Andy Knepp, formerly of Curtis and now of North Platte, was longtime farm manager at NCTA.  He graduated high school in 1954, as did attendee Ralph Nansel of Arnold.

The Aggie Alumni Association recognized Buzz Cole of Curtis with an Aggie Alumni Service Award for his longtime service and support to the high school and college. He graduated high school in 1944.

Del and Bev van Der Werff of Curtis received the Aggie Service Award, both having served the college on faculty, coaching or staff positions for more than 40 years. A future article on their extensive careers spanning 1976 to 2007 will be published later in July.

Professor Van der Werff was the faculty sponsor for the Agribusiness Club in 1980. Six of the eight Ag Business Management classmates from that Class of ’80 returned to Curtis for the special day, after their 40-year reunion was cancelled last year.

David Fulton was president of the Agribusiness Club that year, with Gary Troester one of the club’s representatives to Student Senate. Fulton, who encouraged his class to assemble, surprised Troester with the Aggie Alumni Distinguished Service / Legacy Award. Today, Troester is a unit leader for the Farm Service Agency in California. A news article is planned for a later date.

Bruntz announced two Aggie Alumni scholarships of $400 each to current NCTA students Morgan Preston of Wright, Wyoming, and Allison Wilkins of Gibbon.  Allison was able to attend the luncheon with her father, Michael Gibbons, a 1995 graduate of agribusiness.

Travels from near and far

Individuals who traveled the greatest distance to attend were Troester of Santa Maria, Calif., and Jessie McCleary, a 2001 Vet Tech alumna, from Pullman, Washington.

A date and place will be announced by the Alumni Board of Directors later this year for the 2022 Aggie Alumni Day. For details, see updates at: https://ncta.unl.edu/aggie-alumni.

Part of the University of Nebraska system, the Nebraska College of Technical Agriculture is a two-year institution with a statewide mission of preparing students for successful careers in agriculture, veterinary technology and related industries. NCTA is known for its affordable tuition, high job-placement rate for its graduates, and for the success of student teams in competitive activities including crops judging, ranch horse events, livestock judging, shotgun sports, stock dog trials, and intercollegiate rodeo. The college is consistently ranked as one of the best two-year schools in the nation.