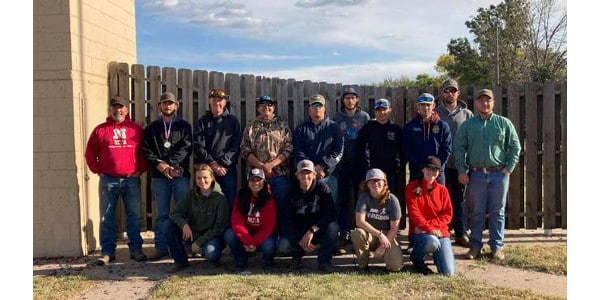 NORTH PLATTE, Neb. — When it comes to breaking clay targets at a trap club, Colby Mitchell of Burwell has his eyes on the prize.

This time it was a bronze medal for placing third in the men’s division of the Prairie Circuit Collegiate Conference meet.

In a weekend contest that drew 110 competitors from nine colleges to the Lincoln County Wildlife Gun Club, Mitchell led six athletes from the Nebraska College of Technical Agriculture at Curtis with a high overall of 458 points.

NCTA was co-host with the members of the Wildlife Gun Club, where the range is located south of North Platte.

“Our team continues to progress and shot very well,” said Aggie coach Alan Taylor, assistant professor. “We had a great representation of collegiate athletes from Nebraska and surrounding states.”

For NCTA, Mitchell was joined by freshmen Gordon Acosta of Bayard, Trey Barnhart of McCook, Kayden Bryant of Firth, Cooper Mazza of Potter, and Austin Youngquist of Auburn.

Jake Garza of Midland University (Nebraska) led the men’s field with 474, Colten Uitermarkt shot 462 for Concordia University, followed by Mitchell of NCTA at 458.

“Hosting the meet was a lot of work, everyone pitched in and it went very well,” said Coach Taylor.

“A big thank you to the NCTA Ranch Horse team for their help in running a match for the nine teams in the Prairie Conference.”

The Aggies compete this weekend in the Concordia Sporting Clay meet at Oak Creek Sporting Clays near Brainard. Then, they travel to Heartland Shooting Park west of Grand Island as Hastings College hosts a meet on Oct. 10-11.