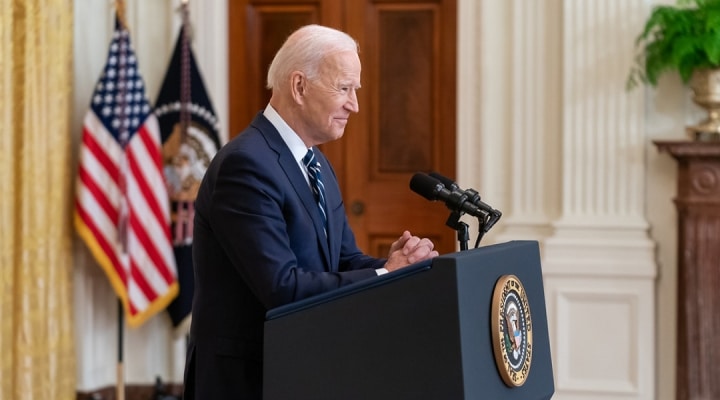 WASHINGTON — Editor’s note: The below statements were released by agricultural organizations following President Joe Biden’s Address to a Joint Session of Congress on April 28th, 2021.

During his first joint address to Congress, President Joe Biden tonight highlighted the progress the United States has made on pandemic recovery and laid out his strategy to create additional jobs and lift more families out of poverty. The linchpin of that strategy is the American Families Plan, a comprehensive package that would invest $1.8 trillion in education, childcare, nutrition assistance, and paid leave.

A longtime advocate of strengthening the nutrition safety net, National Farmers Union (NFU) was heartened by the president’s attention to food insecurity, especially in light of the added challenges caused by the pandemic. “Though the issue of hunger has received a lot of attention over the past year, it certainly isn’t a new problem, and it won’t just disappear when the pandemic ends,” said NFU President Rob Larew. “Fortunately, we already have a safety net to catch families when money is tight – but it isn’t strong or wide enough to support everyone who needs help. President Biden’s bid to expand free school meals and summer EBT is an important step towards reinforcing our existing system so that it can accommodate all Americans experiencing food insecurity.”

To offset the cost of the plan, President Biden is proposing an array of tax reforms, including the elimination of stepped-up basis. In an overview, the White House promised that such a change would “be designed with protections so that family-owned businesses and farms will not have to pay taxes when given to heirs who continue to run the business.”

Larew indicated that he had reservations about the pay-for provisions and sought more information. “While we support many of the recommendations in the American Families Plan, we have questions about how these tax proposals will impact our farms and ranches,” he said. “The devil is in the details.”

President Biden also emphasized the necessity for immigration reform, asking Congress to offer undocumented immigrants a path to citizenship by passing his U.S. Citizenship Act of 2021. Under the bill, farm workers would be fast-tracked for naturalization and would be granted greater protections.

NFU expressed its approval of the bill when it was first released in January, saying that it balances the interests of businesses with those of workers, and has continued to promote practical, compassionate immigration policy in the intermediate months. “We’re pleased that President Biden has kept immigration reform among his top priorities,” said Larew. “It’s very clear that our farm labor system is falling short; it is not providing a steady stream of qualified workers for agricultural employers, nor is it offering necessary protections or a clear future for agricultural workers. Because the U.S. Citizenship Act seeks to meet both parties’ needs, it would go a long way towards building the farm labor system we all deserve.”

In addition to economic recovery and immigration reform, climate leadership was a focus of the address. Included on the president’s list of recommendations for action was incentivizing climate-smart agricultural practices, an approach backed by NFU and many other farm groups. “Farmers know that they can be part of the climate solution, and we’re glad to have an ally in the White House who recognizes that potential,” Larew stated. “We hope these statements of support are followed by immediate and aggressive action from both Congress and the administration to provide farmers with the tools they need to respond to this crisis.”

“While the President addressed many issues of importance to the American people, we are eager to hear more about agricultural-related policies, specifically how we can improve farm program delivery and advance a trade agenda that ensures a level playing field for wheat growers. However, what our farmers saw in President Biden’s American Families Plan earlier today includes changes in the stepped-up basis, which raised a lot of questions in wheat country.

“We understand the American Families Plan’s goal is to target the ultra-wealthy and corporations who are able to evade taxes. However, farmers have several concerns about how changes to stepped-up basis and higher capital gains taxes on inherited assets could negatively impact families looking to pass along the farm to the next generation. Although the President’s plan says these reforms will be designed with protection in mind for family-owned businesses and farms, we want more details about how this would be achieved.

“The new administration plans to address climate-related issues by implementing environmentally-friendly practices. Last week, NAWG launched the new Special Climate and Sustainability Committee. The committee will work together to review wheat sustainable practices that benefit farmers in diverse climates and guide the development of NAWG policy priorities on climate policy. With the committee’s recommendations, NAWG will continue to work with Congress to educate the Hill on the progressive and sustainable tactics farmers practice every day.

“As the Administration considers a new approach on the world stage, let’s make sure that we continue to work on trade deals that develop, maintain, and expand international markets that keep American wheat producers in a strong position.

“NAWG looks forward to continuing to work with the Administration on ways to improve the livelihood of the American wheat farmer.”

In his American Families Plan, President Biden targets several provisions of the tax code to raise approximately $1.5 trillion in revenue over the next 10 years. The National Cattlemen’s Beef Association (NCBA) has long advocated for sound tax policy for rural America.

“Family-owned cattle operations, no matter the size, are the backbone and economic drivers of rural economies across the U.S. Preserving long-standing tax provisions such as stepped-up basis and like-kind exchanges is critical when considering the financial viability of farms and ranches, as well as the ability for the next generation of producers to carry on the family business and conserve the land that has been in their family for generations,” said Danielle Beck, NCBA Senior Executive Director of Government Affairs.

The American Families Plan would repeal the deferral of gain for real estate like-kind exchanges for gains greater than $500,000 and eliminate stepped-up basis for gains in excess of $1 million ($2.5 million per couple “when combined with existing real estate exemptions”) and tax said gains on any property not donated to charity. According to the plan, the reform will be designed “with protections so that family-owned businesses and farms will not have to pay taxes when given to heirs who continue to run the business.”

“When considering how to offset the cost of a comprehensive infrastructure package, it is essential that Congress preserve sound tax policies for family-owned agricultural operations. We are committed to holding Members of Congress accountable for legislation that will not adversely impact the viability of farm and ranch businesses, or the next generation’s ability to continue to sustainably produce an abundant food supply,” Beck said.

“To be clear, we firmly believe that it would be irresponsible to pay for an infrastructure bill on the backs of farmers and ranchers and with that, counterintuitive with this Administration’s conservation agenda. These provisions in the tax code are a determining factor in whether farmers and ranchers access to land is maintained for generations to come, or if that land is fragmented and further threatened by conversion and development, or paved over outright for strip malls and shopping centers,” Beck continued.

NCBA stands ready to work on both sides of the aisle to ensure that Members of Congress understand the needs of cattle producers in regard to tax policy. We are looking forward to continued conversations with lawmakers through extensive grassroots engagement.

India's deepening water crisis at the heart of farm protests

Add beauty, function to your garden with a path