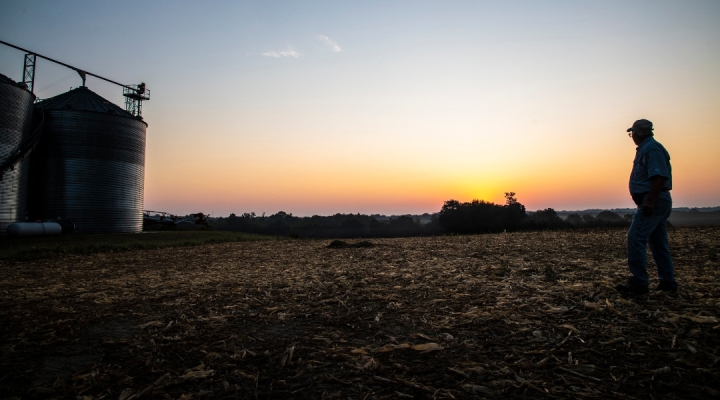 Industry organizations were largely pleased with the passage of the Infrastructure Investment and Jobs Act. (U.S. Department of Agriculture, Public Domain)

“While AFBF was disappointed with the unnecessary delays in the House of Representatives, we appreciate Congress finally passing crucial bipartisan infrastructure legislation. We cannot afford to ignore the millions of miles of roadways, waterways and railways rural America relies on to keep our country fed, especially as we see widespread supply chain challenges.

“Extending broadband to rural communities is just as much a priority. A quarter of America’s farm families have no high-speed internet access while working to meet the needs of a growing world. Investments in physical infrastructure like broadband will be critical to bridging the digital divide.

“Bipartisan efforts such as the Infrastructure Investment and Jobs Act provide commonsense solutions to our nation’s infrastructure challenges, and we look forward to seeing the bill signed into law.”

“The passage of the Infrastructure Investment and Jobs Act is a momentous achievement in boosting our rural communities and the economy as a whole. The bill strengthens our food supply chain as it makes tremendous, much-needed investments in the roads, bridges, dams, and waterways that family farmers and ranchers depend on. The bill also updates hours-of-service regulations for agriculture and livestock haulers, which will keep our crops, inputs, and livestock moving.

“Rural America, like the rest of the country, needs access to high-speed internet, and this bill will make affordable broadband available to the 19 million Americans who have lived offline.

“Provisions in the bill will also help us respond to the climate crisis by increasing the resiliency of watersheds, improving water infrastructure in the west to address more frequent droughts, and by investing in wildfire mitigation.

“This bill, as part of the greater Build Back Better Agenda, recognizes that rural American vitality is key to ensuring the prosperity of our country. We thank President Biden for keeping with his promise and his leadership, and urge Congress to take action on passing the rest of the President’s plan.”

CEO of the National Association of State Departments of Agriculture Ted McKinney praised today’s passage of the bipartisan Infrastructure Investment and Jobs Act by the U.S. House of Representatives by releasing the following statement:

“State departments of agriculture commend the U.S. House of Representatives for coming together to build opportunities for agriculture and rural communities. We can all recognize the importance of a thriving U.S. agriculture industry to all people, and today’s actions will connect more individuals to American grown products and provide financial sustainability for farming and ranching businesses.”

Background
Improving infrastructure and capacity for rural communities is a priority policy issue for state departments of agriculture.

More than 26 percent of rural Americans lack access to broadband services compared to less than two percent of urban Americans according to the Federal Communications Commission. NASDA has consistently advocated for bipartisan solutions for investing in and modernizing rural infrastructure, and most recently, NASDA sent a letter to the U.S. House of Representatives encouraging lawmakers to pass the Infrastructure Investment and Jobs Act.

NASDA members also recognized in addition to investments in digital connection, significant funding is needed to improve the rural roads, highways, waterways and railways necessary for the agricultural community to deliver their commodities and products around the world.

Infrastructure, at Last! Soy So Pleased with House Passage

The House of Representatives has passed H.R. 3684, the bipartisan infrastructure package the Senate passed in mid-August and that soybean growers have supported to assure a modern, efficient transportation structure for American agriculture. This bill makes historic investments in U.S. infrastructure and will greatly impact the competitiveness of soy and other agricultural products for years to come.

Kevin Scott, soybean farmer from Valley Springs, South Dakota, and American Soybean Association president said, “Good things can indeed come to those who wait, and passage of this long-considered bill is a win for everyone in our country. Infrastructure is critical to the long-term success of not only the ag industry, but also the general health of American commerce and global competitiveness. We are very appreciative that our congressional leaders stayed the course on this important package that will bolster the U.S. economy, and which encompasses so many priorities for soy, ranging from surface transportation and waterways funding to investments in rural broadband and new opportunities for soy-based products.”

Soybeans and other agriculture commodities rely on a multimodal network including truck, rail and waterways. The current supply chain challenges underscore the importance of reliable infrastructure, which impacts competitiveness at both the farm level and on the global stage.

ASA thanks members of both chambers for working across the aisle to pass this bipartisan package, which will make historic investments in farm country infrastructure.

The House of Representatives voted last night 228 to 206 to approve the bipartisan infrastructure package, which the Senate passed in August by a vote of 69 to 30, clearing the way for legislation to become law.

The Infrastructure Investment and Jobs Act includes funding important to corn growers, including $17.3 billion for the nation’s ports and inland waterways and $2 billion specifically for rural broadband access. New spending in the bill is paid for through unused COVID relief funds, bonds and extensions of various government fees, and the bill does not include tax increases for individuals or farms.

“We are pleased to see the House act on this legislation which was developed in a bipartisan manner and allocates funding for initiatives that are extremely important to corn growers and rural America,” said NCGA President Chris Edgington. “This is a once in a generation infrastructure investment that will help farmers for years to come.”

As 60% of corn exports move on the inland waterways system, the maintenance of that system is vital for the global competitiveness of U.S. farmers. The funds dedicated to providing broadband access specifically for rural areas will be meaningful for corn growers who rely on this access for marketing crops, using precision technologies and running their business.

The bipartisan infrastructure plan, which has already passed the Senate, will head to the president to be signed into law.

Late last night, the House of Representatives passed the Infrastructure Investment and Jobs Act (H.R. 3684) by a vote of 228-206, which was first passed by the Senate in August. The bill will now go to President Biden for his signature.

“NAWG applauds this historic investment in our traditional infrastructure, which is critical to rural communities and agriculture’s long-term success and viability. The Infrastructure Investment and Jobs Act makes a once-in-a-generation investment in roads, railways, locks and dams, and ports that the ag community relies on,” said NAWG CEO, Chandler Goule. “Prioritizing investments in infrastructure will enhance wheat growers’ competitiveness in the international market. Additionally, this legislation includes hours-of-service changes and provisions to address truck driver shortages which can, in part, help with some of the supply chain issues being experienced across America.”

Bipartisan Infrastructure Bill is a Win for the Cattle Industry

Late last evening, the U.S. House of Representatives passed the bipartisan Infrastructure Investment and Jobs Act of 2021. The National Cattlemen’s Beef Association (NCBA) is pleased to see the passage of this bill, as infrastructure investments are fundamental to the success of the U.S. cattle industry. NCBA Executive Director of Government Affairs Allison Rivera issued the following statement in response:

“The infrastructure package includes several key provisions that NCBA has long advocated for, including funding for the modernization of roads and bridges, funding for high-speed rural broadband, congressional commitment to the improvement of the federal permitting process for critical water-related investments and an additional 150 air-mile exemption for livestock haulers on the destination of hauls, providing much needed flexibility under current hours-of-service regulations.

“Investing in critical infrastructure is consistent with NCBA’s mission to increase producer profitability. The ability for cattle producers to efficiently raise cattle, haul them safely and compete in a fast-paced global marketplace has a direct link to the economic stability of rural communities and a resilient food supply chain. We look forward to the president signing the bill and stand ready to ensure proper implementation.”

“Infrastructure investment is critical to the fertilizer industry because of the just-in-time nature of demand. Fertilizer needs to be delivered to growers exactly when and where they need it and there is not much room for error,” Rosenbusch said. “Bottlenecks due to road or bridge closures or delays due to crumbling locks and dams can negatively impact the timely delivery of necessary crop nutrients to farmers. Fertilizer is critical to strong yields and the success of America’s agricultural industry.

Surface transportation provisions of particular importance to the fertilizer industry are $110 billion for Highway programs, including $12.5 billion for the Bridge Investment Program, and the inclusion of the Drive Safe Act apprentice program and Hours of Service exemption. “All fertilizer utilized in the United States touches a truck at least once, meaning that reliable and safe highways, roads and bridges are of paramount importance,” Rosenbusch explained.

Rosenbusch next highlighted the $17 billion for waterway infrastructure and the $2.5 billion marked for inland waterways construction, explaining that “fertilizer moves year-round by rail, barge and pipeline and ocean vessels and there is much funding needed to address over $8 billion in backlog maintenance for inland waterways.”

Connecting rural America to broadband is also a priority of TFI, with Rosenbusch calling it essential for precision agriculture and the wider implementation of 4R Nutrient Stewardship practices, a scientifically proven method of maximizing crop yields while significantly reducing environmental impacts.

“It has been a long road to get here, but we applaud the House and Senate for coming together and passing this much needed legislation,” Rosenbusch concluded. “Half of all crop yields are directly attributable to fertilizer. If growers don’t receive fertilizer in a timely manner, then there are potential consequences for food security and the environment. We urge President Biden to sign this landmark legislation as soon as it comes across his desk.”

Statement on Passage of the Bipartisan Infrastructure Bill

Today, Chris Gibbs, Ohio farmer and Board President of Rural Voices USA, the nationwide network of farmers and rural community leaders, released the following statement after the U.S. House of Representatives passed the Bipartisan Infrastructure bill which makes unprecedented investments in rural infrastructure.

“This is an enormous victory for rural America. This bill invests in good paying jobs by tackling infrastructure projects that are essential to rural commerce, agriculture and heartland communities. Of particular importance to rural communities is the historic investments this bill makes in rural broadband. The broadband expansion in this bill is a modern-day version of rural electrification and will have lasting impacts in the way many rural Americans learn, work and connect.

“Passage of this bill is also a signal to rural America that the federal government can be responsive to the needs of their communities. Seeing construction crews repair crumbling bridges or creating new broadband connections will be a tangible reminder that politics is about more than the bickering on cable news.

“The only way to bridge the widening divide between rural America and Washington, D.C. is to continue to focus on impactful policies like infrastructure. To that end, we are hopeful that Congress will soon also send the Build Back Better plan to the President’s desk. That bill includes vital investment like universal pre-school, reduction in prescription drug costs and support for retirees that will similarly be seen and felt in rural America.”