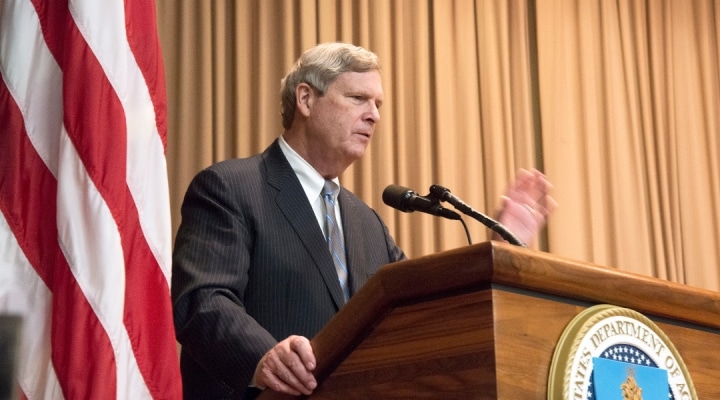 Tom Vilsack has been nominated to serve as the head of the Agriculture Department. (U.S. Department of Agriculture, Public Domain)

President-elect Joe Biden is expected to nominate Tom Vilsack to serve as Secretary of Agriculture.

The following statement may be attributed to American Farm Bureau President Zippy Duvall:

“Tom Vilsack understands that the agriculture sector is far more complex than most people understand. He believes in a ‘big tent’ philosophy that supports all types of production and understands the importance of respecting farmers and ranchers as partners worthy of support in the race to achieve sustainability goals.

“Tom and I built a good relationship during his first term as Ag Secretary and we’ve built on that relationship in his current role with the U.S. Dairy Export Council. I look forward to sitting down with him again to continue our conversation on how to address the opportunities and challenges facing agriculture and rural communities. The pandemic revealed both the strengths and weaknesses of our food system, which Tom has had a front row seat to witness.

“Together, we must prepare to tackle a new farm bill and build on efforts to create a fair marketplace for U.S. agriculture to compete globally. It is essential we ensure climate policies respect farmers and remain market-based and voluntary. And, we must end the digital divide that puts rural America at a disadvantage.

“Tom Vilsack earned a reputation for rising above partisanship to serve farmers and ranchers and I’m confident he’ll continue to do so. The American Farm Bureau stands ready to support Tom and work closely with him knowing his success as Ag Secretary correlates directly with America’s farmers and ranchers, as well as our rural communities, having the support they need to flourish.”

Several media outlets today reported that President-elect Joe Biden intends to nominate Tom Vilsack to return to his previous post of U.S. Secretary of Agriculture, which he held for eight years under President Barack Obama.

National Farmers Union (NFU) President Rob Larew released the following statement in response to the news:
“Between pandemic recovery, the imminent threat of climate change, rampant corporate power, and chronic overproduction, family farmers and ranchers have significant challenges ahead of them in the next several years – and they need a strong Secretary of Agriculture behind them to make it through in one piece. After eight years leading USDA, Tom Vilsack has the necessary qualifications and experience to steer the agency through these turbulent times. He must use his impressive set of skills to implement and enforce rules that protect farmers from anticompetitive practices, enact meaningful structural reforms that balance supply with demand, restore competition to agricultural markets, strengthen local and regional food systems, advance racial equity in agriculture, and mitigate the threat of climate change.

“However, the Secretary’s obligation is not just to serve farmers; it’s also to serve the American public at large. Many of the aforementioned reforms will benefit everyone by building a food system that is fairer, more sustainable, and more resilient to disruptions. In addition to those changes, we would urge Vilsack to expand nutrition assistance programs in order to ensure that millions of individuals who are facing unemployment and food insecurity are able to meet their most basic needs through the pandemic.”

As the American Soybean Association (ASA) brings on a new slate of soy growers today to oversee the organization in 2021, it applauds news of Tom Vilsack’s nomination to lead the U.S. Department of Agriculture.

ASA’s farmer-leaders would like to welcome back the former two-term Iowa governor who served as Secretary of Agriculture for eight years during the Obama Administration.

“We are thrilled to hear that such a qualified candidate with a solid track record supporting policy and regulatory decisions important to soybean growers is on deck to lead USDA in 2021,” incoming ASA President Kevin Scott said. “Vilsack, who is from a large soybean-producing state, brings significant experience, having led USDA effectively in the past, and will hit the ground running upon his return.”

Scott also pointed to Vilsack’s agriculture knowledge and emphasized his history of advocating for biodiesel and biotechnology, among other soybean farmer concerns.

“In his years as USDA secretary under the Obama Administration, Vilsack was a staunch supporter for renewable fuel initiatives, biotechnology advances, fair trade agreements and preserving the farm safety net,” Scott said. “U.S. soy growers would welcome his support and the opportunity to work with him again.”

ASA, along with other agriculture groups, urges the U.S. Senate to swiftly confirm Vilsack’s nomination when officially submitted in January and is appreciative of its long history working with USDA.

“The National Corn Growers Association congratulates Secretary Vilsack on his nomination to lead USDA. In his eight years leading the Department during the Obama administration corn farmers appreciated his willingness to listen to the input from growers across the country and his steadfast commitment to agriculture, renewable fuels, our environment and USDA’s food and nutrition programs. He’s been an outspoken advocate for rural America and we look forward to working together again, along with President-elect Biden, to build long-term demand for our product, mitigate the impact of climate change, seek new markets around the globe, and continue to feed and fuel the world.”

“NAWG congratulates former Agriculture Secretary Tom Vilsack for being nominated to serve under the Biden-Harris Administration as Secretary for the USDA.

“We look forward to working again with former Secretary Vilsack, and are ready to engage with any new staff at USDA.

“Former Secretary Vilsack’s understanding of policies important to wheat will be critical as the Department continues work to address the many economic challenges facing farmers across the country. Previously, his willingness to meet and listen to stakeholders as the USDA develops programs and regulations was key. Former Secretary Vilsack’s wealth of experience and his knowledge of agriculture are important attributes for this role.”

NMPF Statement on Nomination of Tom Vilsack as Agriculture Secretary

“Tom Vilsack has dedicated his life to service. While we will miss him as a colleague and friend, all of us in the dairy community who have had the opportunity to work with him over the past four years know his deep passion and commitment to rural America and his understanding of its interdependence with our urban and suburban communities. The challenges that lie ahead are many – from a battered farm economy to climate change, the environment and sustainability, to nutrition and the importance of addressing the nation’s growing food insecurity, as well as the need for better trade policy and expanded markets abroad, and much more. No one is better suited to tackle these challenges than Tom Vilsack.

“We applaud President-elect Biden’s decision, and we look forward to Secretary Vilsack’s next chapter of leadership in American agriculture.”

“Former USDA Secretary Tom Vilsack is adding another chapter to an already storied career in agriculture. He has the unique skill set to be able to hit the ground running on day one and cattle producers are thankful for this continuity,” said NCBA CEO Colin Woodall. “Secretary Vilsack knows the issues facing America’s cattle producers and can utilize his extensive experience to showcase the positive impact we have on food security, nutrition, and our natural resources. We look forward to working with him for the betterment of beef farmers and ranchers.”

“Secretary Vilsack brings experience and leadership to the Department of Agriculture at a critical time when the meat and poultry industry works to put food on American’s tables and to keep the farm economy working in a pandemic. We look forward to working closely with Secretary Vilsack in his new role to ensure our industry remains a valuable partner to livestock producers, an efficient supplier to consumers and competitive in the international marketplace.”