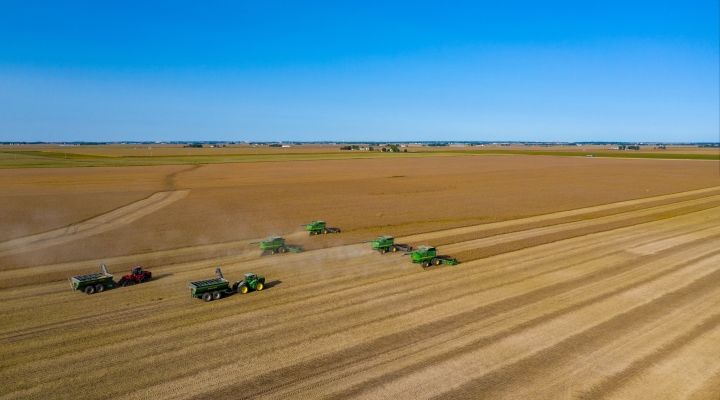 “It’s an interesting time to be in agriculture,” Risk Management Advisor Tommy Grisafi said on current high commodity prices. “Bull markets don’t happen often, and you need to be a part of this one.” (James Baltz/Unsplash)

Following years of depressed commodity prices, Risk Management Advisor Tommy Grisafi said producers are entering a “new modern bull market.” Since August, buoyed by favorable weather conditions and record exports following trade deals, soybean prices have spiked nearly 60 percent and stand at a seven-year high. Commodities across the board are also seeing price increases at the Board of Trade.

“It’s an interesting time to be in agriculture,” Grisafi said. “Bull markets don’t happen often, and you need to be a part of this one.”

Grisafi advised producers to be aware of interest rates, which are at record lows but could rise in 2021 with little notice. Farmers should look into refinancing loans if they’re eligible, he said.

“No one can help you more than you can help yourself,” he said. “In the end, it’s our job to feed the world. The future of ag is great, but you need to be great along with it,”

If past is prologue, Grisafi predicted the high prices won’t last forever. Growers should plan accordingly, he said.

“I’m scared for long, sustained prices,” he said. “The party will be fun, but the hangover could be awful.”

A view from St. Paul

Following the start of the 2021 Legislative Session, Minnesota Soybean Growers Association Executive Director Joe Smentek presented an overview of the legislative structure in St. Paul, along with MSGA’s priorities for the year. After the 2020 election, Smentek said the rural-urban divide has grown even starker. Once again, Minnesota is the only state in the country with a split legislative body (Democrats control the House, while the Republicans maintain a Senate majority).

Smentek said the Legislature’s farming representation has decreased steadily throughout the years. In 1962, when MSGA was established, 63 state legislators farmed. This session, only eight farmers (all in the House minority) make up part of the legislative body.

MSGA has a roster of legislative priorities this session, namely protecting agricultural interest in the state’s budget, given ag is the state’s second leading economic generator and accounts for roughly 25 percent of the state’s GDP.

“We’re also looking at making sure the state’s noxious weed programs remain funded, along with other Department of Ag programs that help our farmers,” Smentek said.

Smentek also said increasing the state’s use of biofuels and defending the biodiesel mandate, which helps add nearly $1.7 billion toward Minnesota’s economy, will remain a high priority. MSGA also supports the Minnesota Corn Growers Association in its efforts to move to E15. Earlier this week, MSGA President Jamie Beyer spoke with the elected officials during a virtual “State of Soy” presentation, where she gave an update on the latest developments with the Ag Innovation Campus in Crookston, which broke ground in October 2020.

Jared Goplin, a University of Minnesota assistant Extension professor, spoke about the yield benefits of crop rotation for growers. Corn only needs one year to maximize yield, Goplin said. Taking more than a year from soybean can increase yields by seven percent, compared to a corn-soybean rotation.

“As crop prices get better you’re going to be able to make money without getting fancy,” he said.