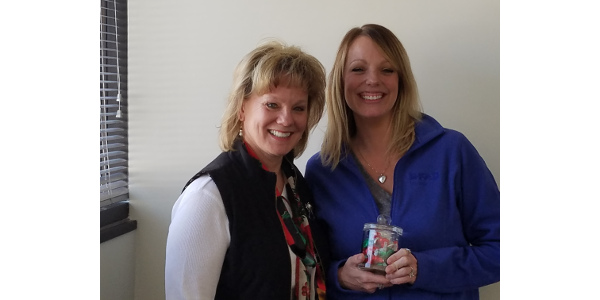 EAST SYRACUSE, N.Y. — The year 2016 was a productive one for Kara Sweet Argetsinger, both personally and professionally. There was that milestone moment some five months ago when she gave birth to little Hadley Mae. She was also productive in her job. She was named Workers Compensation “Sales Person of the Year” for the Agri-Services Agency (ASA), working through its sister agency, Gannon Associates Insurance.

Kara started working at Gannon’s in June of 2012 and has been specializing in working with agricultural clients since 2014.

ASA, a wholly owned subsidiary of DFA, a milk marketing cooperative with about 9,600 member farms, was formed more than 30 years ago “to bring affordable insurance programs to farmers and other agribusiness owners, their families, and their employees.” Gannon and ASA have formed an impressive alliance for a number of years, helping fill a void for those working in agribusiness.

Illness and injury can be particularly devastating to farmers and Work Comp, as it is known, can help replace lost earnings and medical benefits for everyone in the field from family farmers to those who make their living in commercial agribusiness operations.

Kara, who has a bachelor’s degree in communications from Mansfield University, came to the insurance business from the field of payroll services. She said that she has been able to achieve success as an agricultural sales specialist by setting and conquering goals.

“It is easy to surpass your goals when you wake up everyday loving what you do,” she said of her sales accomplishments for ASA in 2016.

Kara is married to Tom Argetsinger and five-month-old Hadley is the newest addition to their blended family of five, includes her older siblings, Hunter, 16, and Brooke, 11.

ASA allows agribusiness owners to be competitive with other businesses in hiring and keeping quality employees. Work Comp protection helps provide that competitive edge, as do other offerings like health insurance, farm insurance and group term life.

“Thank you for all your hard work and providing a wonderful service to our DFA members,” Beirne concluded in announcing the award.