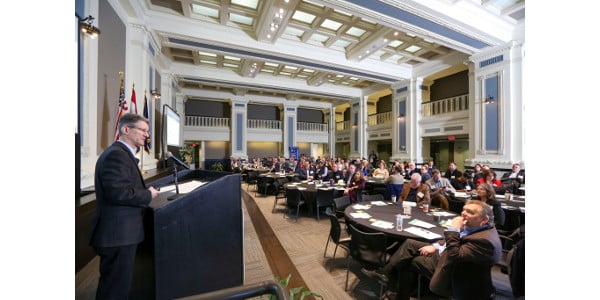 Dr. Carrington is the president of the Danforth Center in St. Louis. (Courtesy of Agricultural Business Council of Kansas City)

KANSAS CITY, Mo. — The question why came up in various forms during the Agricultural Business Council of Kansas City’s 2020 Ag Innovation Forum held in the KC Chamber of Commerce Board Room at Union Station. In his keynote remarks, Dr. Jim Carrington, president of St. Louis-based Donald Danforth Plant Science Center, suggested the science community needed to be explaining why it was researching something instead of describing what it was doing. A practical reason to focus on the why, he said, was that projects “don’t get vested without a Why.” Investors want to know why a platform, a chemistry, a robotic or such is being developed. Dr. Carrington also noted scientists need to keep an eye on the prize: That science should forge economic engines.

The Forum’s closing keynoter, Dr. Michael Helmsetter, president and CEO of TechAccel in Kansas City had a different spin on the Why. He was asking why the Kansas City ag and animal health industry didn’t have a bigger “stake in developing” the area’s ag science innovation, given all the existing talent, capabilities and infrastructure. “We’re the ag leader in the Midwest.” He said there is “a lot of investment capital in the ag space” but other regions are attracting a larger share. He pointed to the Bill and Melinda Gates Foundation, perhaps influenced by the success of the Donald Danforth Plant Science Center, that is funding ag-related projects in St. Louis.  “Money attracts money,” Dr. Helmsetter said, with the implication that the Kansas City region needs to step up.

As speakers and panel moderators commented on advances in ag tech, Dr. Dan Thomson, Jones Professor of Production Medicine and Epidemiology at Kansas State University’s College of Veterinary Medicine, offered insightful food for thought to the proceedings. “There are two groups that don’t care about science and food,” he stated, “the rich and the poor.” Why? Because, he explained, “The rich err to the side of safety because they can afford it and the poor just want to eat.” Poverty is determined by the price of food, he added.  “If we make snap decisions that increase the cost of food production without increases in wages for people,” he went on, “we will increase poverty in our country – which not only increases food insecurity but decreases the value of SNAP coupons which decreases the value of taxes paid by American citizens.”

Host and emcee for this year’s Ag Innovation Forum, Chelsea Good, vice president government and industry affairs and legal, Livestock Marketing Association, concluded the event with a question of her own. Wrapping up the proceedings, she cited the industry expertise of both the speakers and the audience. “As we leave the hall today, we’re energized and excited about the future of technology in agriculture,” Good said. “But are we solving problems, offering solutions to problems farmers don’t think they have?”

Promising Projects in the Pipeline

Communicating with employees during a crisis
March 26, 2020