Home » Ag groups respond to Ricketts State of the State 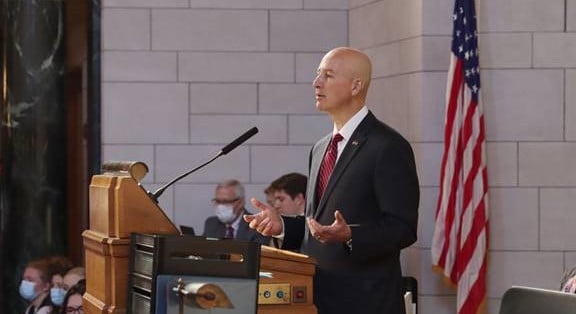 LINCOLN, Neb. — On Jan. 13, Governor Ricketts delivered his 8th and final State of the State address. During his comments, the Governor celebrated how “the 2021 session ushered in a historic level of tax relief” that will deliver $2 billion in relief to Nebraskans over the next two years. Additionally, the Governor gave high praise for the passage and implementation of the Nebraska Rural Broadband Bridge Act. He noted that an additional thirty thousand Nebraska households will have access to high-speed broadband because of the effort.

“Nebraska Cattlemen is grateful for the collaboration between the Ricketts administration, senators, our membership, and others to have made these monumental changes a reality in 2021.” said Brenda Masek, President, Nebraska Cattlemen. “Property tax relief and reform remains a priority for Nebraska Cattlemen members.”

Nebraska Cattlemen is also very appreciative of the commitment by Governor Ricketts to invest in meat processing capacity throughout Nebraska. During his remarks, Governor Ricketts emphasized the importance of investment in shovel-ready projects which have been delayed by the pandemic, like Sustainable Beef, LLC in North Platte, Nebraska. Governor Ricketts doubled down on processing capacity investments by allocating funds for grants to small and medium-sized meat processors in his American Rescue Plan Act of 2021 proposal.

“The events of the past couple of years have highlighted the fragility of the beef supply chain, especially at the packer/processor level. In the wake of COVID-19 related plant slowdowns and closures, in addition to other black swan events, Nebraska’s cattle producers are grateful for additional resources to bolster continuity and security in the beef supply chain.” Brenda Masek stated.

Nebraska Cattlemen leadership and staff looks forward to working with the Governor to make these positive proposals a reality.

“Property tax relief remains the highest priority for Nebraskans and the members of Nebraska Farm Bureau. We greatly appreciate Governor Ricketts’ continued efforts to address this important issue. We strongly support LB 723, a bill introduced by Sen. Tom Briese of Albion, which would address the governor’s desire to put a floor under the $548 million dollars in annual property tax relief provided by LB 1107. But even with that floor, we would still be out of balance by $700 to $900 million dollars for all Nebraska property taxpayers. Good tax policy in Nebraska means balancing the three-legged stool. We look forward to working with the governor and members of the Legislature to build upon the historic amount of property tax relief provided during the last session.”

“Governor Ricketts also laid out bold plans to address Nebraska’s water security, infrastructure, and quality through buildout of canals, reservoirs, and improvement projects. We look forward to working with the governor and the Legislature as they ensure Nebraska has quality water to support our way of life for decades and centuries to come.”

“Finally, Governor Ricketts pointed out that Nebraska has a budget surplus, not only in the General Fund, but through federal COVID aid, and federal infrastructure package dollars. This is a great opportunity to address needed issues such as rural broadband, road and bridge projects, and economic development opportunities that would positively impact rural Nebraska and the agricultural industry.”

“We appreciate Governor Ricketts’ efforts to include rural economic development in his suggested use of American Rescue Plan Act (ARPA) dollars specifically in the areas of workforce development, housing, business development, and expanding our opportunities in the meat processing sector. We agree that the governor has kept his promise to ‘Grow Nebraska,’ and we look forward to working with him and the Legislature on these bold proposals to ensure Nebraska agriculture continues to lead the way towards our state’s success.”