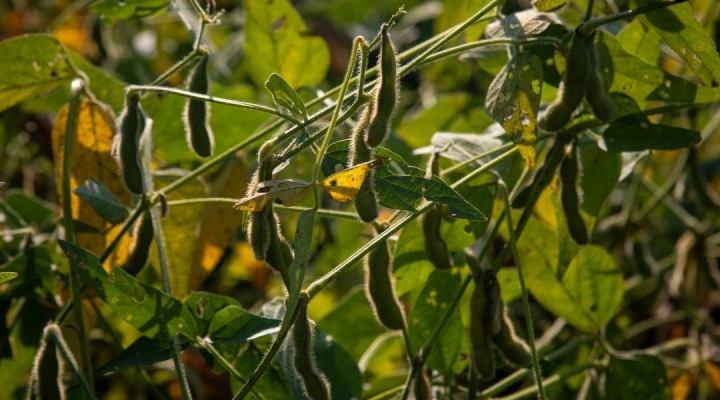 Kevin Scott, soy grower from Valley Springs, South Dakota, and American Soybean Association president said, “Chlorpyrifos is a vital tool in the soybean grower’s toolbox, one which EPA has itself said poses no food or environmental risk of concern." (Stock photo via U.S. Department of Agriculture, Public Domain)

WASHINGTON — This week, more than 80 agricultural groups filed formal objections to the Environmental Protection Agency’s Aug. 30 rule to revoke all tolerances of chlorpyrifos. Stakeholders, by law, can object to pesticide tolerance changes or cancellations, and the EPA Administrator must then respond.

In the coalition letter, objectors from across the agriculture sector cited numerous concerns with EPA’s revocation decision, including the processes EPA used and lack of scientific basis. EPA’s own scientific record on chlorpyrifos shows there are many safe, high-benefit uses of the chemistry that do not pose a dietary or environmental risk. Regardless, the agency is opting to revoke tolerances for these safe, low-risk uses.

American Farm Bureau President Zippy Duvall called the EPA action shortsighted, saying, “Taking care of the land and our natural resources is a top priority for farmers, and this revocation rule actually makes it harder for us to do that. EPA veered from its own scientific evidence in a decision that could be damaging to the land, to farmers and to our efforts to fight food insecurity.”

Additionally, EPA’s rule revokes tolerances on crop uses where many growers have few or no pest management alternatives, leaving them exposed to hundreds of millions of dollars in irreparable crop damage. The revocation rule would also require food holders to provide retroactively-required application documents, which could result in the destruction of millions of dollars of safe food over a paperwork issue.

“It is upsetting that EPA has revoked such an important chemistry without input from USDA or other stakeholders. Chlorpyrifos is critical to the Michigan and Wisconsin cherry industries, as there are no other products that effectively control trunk borers. With more than 4 million cherry trees, Michigan grows 75% of the total U.S. production of tart cherries and roughly 20% of the total U.S. production of sweet cherries. Without this product, our growers risk losing a lot of trees, potentially jeopardizing their family farms,” said Mike VanAgtmael, a west Michigan cherry grower and chairman of the Cherry Marketing Institute.

Kevin Scott, soy grower from Valley Springs, South Dakota, and American Soybean Association president said, “Chlorpyrifos is a vital tool in the soybean grower’s toolbox, one which EPA has itself said poses no food or environmental risk of concern. Without it, many farmers may have to increase the amount of alternative pesticides they apply, as there are no one-to-one replacements for several pests chlorpyrifos helps control. EPA’s action—counterproductive to the agency’s intended mission—is undermining the ability of growers to be good environmental stewards.”

Dan Younggren, a fifth-generation farmer from Hallock, Minnesota and president of the American Sugarbeet Growers Association also expressed that concern and said, “The use of chlorpyrifos is essential in our ability to control the sugar beet root maggot (SBRM), thereby maximizing yields and ensuring stability of the U.S. food supply. Alternative chemistries, which are not as effective, will require more frequent applications and will increase GHG emissions. And, having one less chemistry in our Integrated Pest Management (IPM) strategy could increase the likelihood of insecticide resistance. Without chlorpyrifos, we could experience significant yield losses of up to 45%, which would be economically devastating to our growers.”

The groups ask EPA to postpone implementation of the rule until these objections can be formally considered and addressed by the agency.

A full copy of the stakeholder objection letter can be found here.

Cherry Marketing Institute is a national organization that represents U.S. tart cherry growers in Michigan, Wisconsin, and Utah for a variety of issues including national and international marketing, government, research, and other industry needs. CMI also represents the Michigan sweet cherry industry, as well. For more, visit usacherries.com.