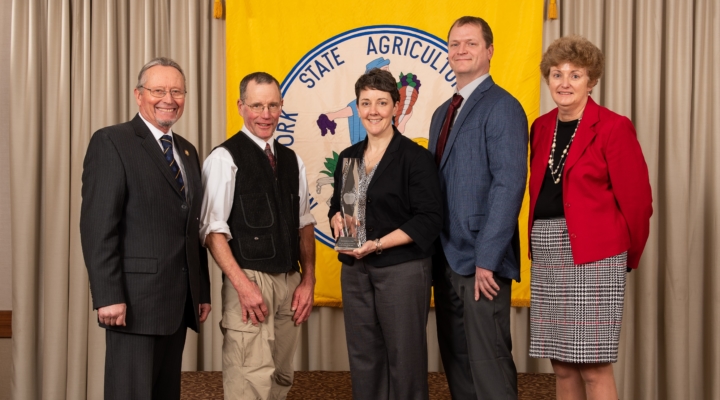 Countryside Veterinary Clinic is the largest provider of veterinary services for pet owners, dairy/livestock farmers and horse owners throughout northern NY. They were honored with the Business of the Year Award at the historic 187th Annual Meeting & Forum of the NYS Agricultural Society on January 9th. This is the 17th year the Society has awarded the honor which recognizes quality, leadership and innovation in both an agribusiness and single producer. The producer honoree was Brooklyn Grange located in the Brooklyn Naval Yard. Located on 2 rooftops in NYC, they grow over 50,000 pounds of organically cultivated produce per year and operate an apiary. From L to R: Commissioner Richard Ball – NYS Department of Agriculture & Markets, Dr. Peter Ostrum, Dr. Stacy Kenyon, Dr. Craig Pauly, Elizabeth Claypoole – NYS Ag Society President. (Courtesy Photo)

SYRACUSE, N.Y. — Each January, agricultural and food industry leaders gather in Syracuse at the NYS Agricultural Society Annual Meeting & Forum to discuss pressing issues and recognize peers for outstanding achievement. The historic event, now in its 187th year, draws a wide-range of producers, suppliers, regulators, educators and promoters. In 2019, fallout from international trade disputes is top-of-mind for multiple commodities and rural communities across NYS and the nation who depend on a healthy export business to zero-out production surpluses and strengthen prices. The Forum featured four experts who brokedown the trade debate, discussed emerging opportunities, and addressed how best to resolve conflict without disrupting markets. Global expert, Dr. Robert Thompson, Tom Sleight of the U.S. Grains Council, Bill Schreiber of O-AT-KA Milk Products and Kathryn Bamberger of Empire State Development set the table for discussion.

US trade policy has evolved dramatically from the 1930s to establish rules of the jungle, according to Dr. Robert Thompson, professor emeritus at the University of Illinois at Urbana-Champaign. With extensive work experience in more than 90 countries worldwide, Thompson quipped that President Donald Trump hasn’t read many of these as trade policy between friendly partners and others is now under the microscope and threatened. “The winds of trade have been whipping us,” said Thompson, “but that’s nothing new. Moving forward, there are many factors that will dramatically alter US agricultural trade policy that will be out of the hands of local producers, such as dynamic changes in global consumption, urbanization, production practices, land utilization, and climate change.”

The climax of the annual Forum is the presentation of the “State of the State” of agriculture address presented by Commissioner Richard Ball of the NYS Department of Agriculture and Markets. “I’m glad to be at this family reunion,” said Ball. “I’m the luckiest man on the planet to be part of the 1% of the population that’s involved in agriculture and working for you in Albany. 2018 was a sobering year in terms of weather events, market upheavals, exports, unpredictable prices and the government shut-down. But NY agriculture is strong, diverse and produces high quality products. Our governor is asking us to question everything, so we can develop and implement applicable and accurate programs and policies. I travel to every corner of the state, and everything I see inspires me.”

2019 Century & Bicentennial Farm Awards—Recognizing Eastern NY farms in 2019 that are in continuous
operation for 100 years or more by the same family on the same land.

Business of the Year—Awarded to both a producer and an agribusiness, recognizing quality, leadership and innovation.

Next Generation Farmer Award—Recognizing a long-time producer and those new to the industry who are farming in new and vibrant ways.

Distinguished Service Citation—Recognizing an individual who has dedicated a lifetime of service, resulting in outstanding contributions to NY agriculture.

NYS FFA Chapter of the Year—Founded nationally in 1925, FFA makes a positive difference in the lives of high school students by developing their potential for leadership, personal growth and career success through agricultural education. The NYS Agricultural Society recognizes a NY chapter annually that exemplifies excellence in all categories.

Ag Promotion Awards—Recognizes individuals and groups for their efforts to improve the understanding of agriculture in NYS.