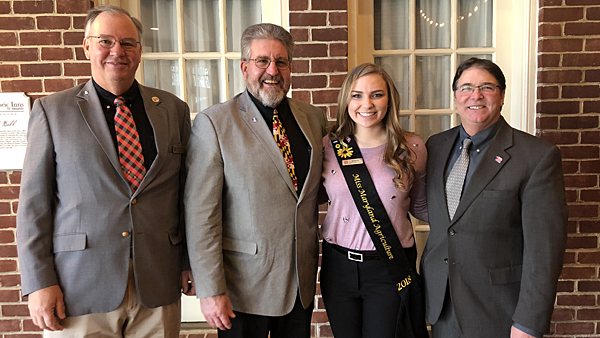 DAVIDSONVILLE, Md. — Nearly 100 Maryland Farm Bureau members traveled to the state capitol on Jan. 30 for the organization’s annual Day in Annapolis event. Farmers from across the state engaged with their legislators over breakfast to discuss pressing issues in agriculture, following a briefing by government relations staff. The event was sponsored by MFB’s Young Farmers and Women’s Leadership Committee.

“We welcomed 60 new legislators to the Maryland General Assembly this year, so it was especially important that our members took the time to talk with their representatives about the issues most important to them,” said Chuck Fry, MFB President. “The more they understand how and why we operate the way we do, the more they will consider our operations and the agriculture industry when drafting and voting on bills.”

Maryland farmers gathered in Annapolis for breakfast to discuss top priority issues with their legislators regarding agriculture viability, education, transportation and the environment. Following breakfast, many traveled to legislative offices for further discussion.

There was great support for a proposed bill to prohibit the labeling of plant-based beverages as “milk” in Maryland to align with the Food and Drug Administration’s definition of the word.

Farmers were also supportive of establishing a Produce Safety Program through the state Department of Agriculture to conduct inspection, compliance and enforcement activities for the Produce Safety Rule, instead of being conducted through the Food and Drug Administration (HB 50).

A 2014 bill that passed with a 5-year sunset clause is up for review with HB 331 and SB 133 aiming to repeal the termination date. Farmers expressed their support of this bill as it would allow them to travel to rented farmland and deliver grain and other crops as needed. There was also concern of counties and towns banning transportation of livestock and other animals to and from fairs, shows and festivals.

Despite the many bills that Maryland Farm Bureau and its members are in support of, there is one bill discussed that farmers are opposed to regarding the prohibition of chlorpyrifos in the state (HB 275 and SB 270). Farmers believe pesticide regulation should be left in the hands of the federal government.

Maryland Farm Bureau thanks the members of the Maryland General Assembly who took time to speak with our members and for their continued support of agriculture.