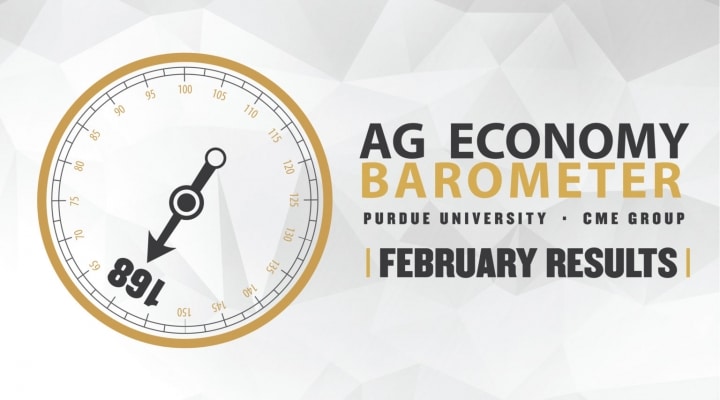 "Optimism about the agricultural trade outlook was underpinned by recent trade agreements and appeared to be the primary driver behind the improvement in sentiment," said James Mintert, the barometer’s principal investigator and director of Purdue University’s Center for Commercial Agriculture. (Purdue University Center for Commercial Agriculture/CME Group)

WEST LAFAYETTE, Ind. and CHICAGO — Producers’ perception of improved current conditions in the agricultural economy pushed the Purdue University/CME Group Ag Economy Barometer to all-time record highs. The barometer rose to 168 in February, an increase of one point from January, and was up 18 points since December.

This month’s increase was attributable to an improvement in the Index of Current Conditions, which rose 12 points from January to a reading of 154. Meanwhile, the Index of Future Expectations fell just 4 points below the record high set in January to a reading of 175. The Ag Economy Barometer is based on a mid-month survey (Feb. 10-14) of 400 U.S. agricultural producers.

“Almost across the board, producers indicated they were more optimistic about current conditions on their farms and in U.S. agriculture, and retained most of the improvement in future expectations exhibited in January,” said James Mintert, the barometer’s principal investigator and director of Purdue University’s Center for Commercial Agriculture. “Optimism about the agricultural trade outlook was underpinned by recent trade agreements and appeared to be the primary driver behind the improvement in sentiment.”

Although some voiced concerns about the possible impact of the COVID-19 virus on agricultural trade in mid-February, when the survey was conducted, producers remained relatively optimistic about the resumption of trade with China. The percentage of producers expecting the soybean trade dispute to be settled soon, which peaked at 69% in January, declined to 61% in February; however, it was still the second most positive response since the question was first posed in March of 2019. Producers also remained optimistic that the trade dispute will be resolved in a way that’s favorable to U.S. agriculture, with 80% expecting an outcome that is ultimately positive for U.S. agriculture.

“As the COVID-19 virus footprint continues to expand, it remains to be seen whether it will impact farmer sentiment at home,” Mintert said.

Expectations for an improvement in farmland values also rose to an all-time high in February. When asked to look ahead five years, 59% of producers said they expect farmland values to rise, up from 50% in January. This was the most positive response to the question since data collection began in 2015. There also was a somewhat more optimistic outlook with respect to making large farm investments. The Farm Capital Investment Index rose from a reading of 68 in January to 72 in February.

The March 16 sign-up deadline for producers to make their program choice under the 2018 Farm Bill is looming. This month’s survey focused on the program choice intentions of producers who grew soybeans in 2019. Four out of 10 (37%) said they were still uncertain regarding which program they would choose. Meanwhile, nearly 40% of respondents said they planned to choose the ARC-County program, the most popular program under the 2014 Farm Bill, followed by the Price Loss Coverage program at 19%, and the ARC-Individual Coverage program at 7%.

Read the full Ag Economy Barometer report at https://purdue.ag/agbarometer. This month’s report provides further insight into the impact of trade on producer sentiment. The site also offers additional resources – such as past reports, charts and survey methodology – and a form to sign up for monthly barometer email updates and webinars. Each month, the Purdue Center for Commercial Agricultural provides a short video analysis of the barometer results, available at https://purdue.ag/barometervideo.

Ramping up the fight against Fall Armyworm