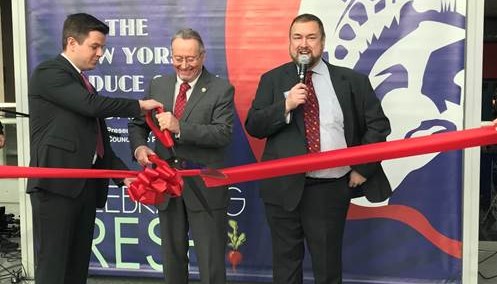 “We’re excited to take part in the New York Produce Show and shine a spotlight on some of our state’s specialty crops, including the popular fruits and vegetables that help make New York State a national leader among food producers,” said Commissioner Ball. “It is an opportunity to promote the best products coming out of our state and let more buyers know that our growers and farmers meet the highest standards for environmental stewardship and food safety.” (Courtesy Photo)

ALBANY — State Agriculture Commissioner Richard A. Ball today kicked off the ninth annual New York Produce Show and Conference during a ribbon-cutting event with organizers at the Jacob K. Javits Center in New York City. The NYS Department of Agriculture and Markets is proudly featuring its specialty crop growers and their products at the second-largest produce trade show in the country.  Approximately 1,200 buyers from around the globe will attend this year’s New York Produce Show.

“We’re excited to take part in the New York Produce Show and shine a spotlight on some of our state’s specialty crops, including the popular fruits and vegetables that help make New York State a national leader among food producers,” said Commissioner Ball. “It is an opportunity to promote the best products coming out of our state and let more buyers know that our growers and farmers meet the highest standards for environmental stewardship and food safety.”

Jim Prevor, founder of Produce Business magazine, which co-sponsors the New York Produce Show, said, “Our collaboration with New York State ag leadership goes back to our show’s early inception and is instrumental in helping us succeed in putting buyers and sellers of produce together. It is only fitting that the New York State Department of Ag take such a prominent role in its home state, which is the hub of commerce for much of America’s fruit-and-vegetable buying activity.” 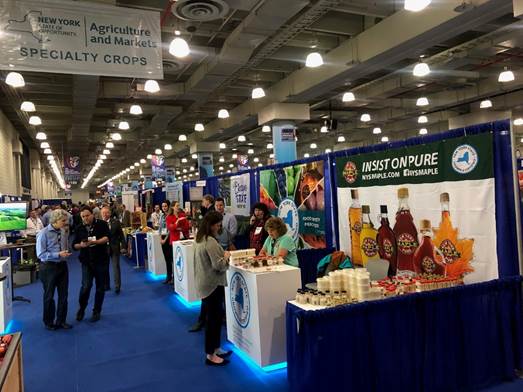 The Department’s exhibit will highlight the diversity of New York’s specialty crop growers, providing them the opportunity to connect with buyers and potential new markets, including retailers, wholesalers, and procurement executives at restaurants and other foodservice operators, through the Taste NY and NYS Grown & Certified programs.  Six booths will feature NYS Grown & Certified, the New York Maple Producers’ Association, the NYS Vegetable Growers Association, and Concord grape industry representatives. Visitors can enter a drawing by dropping off their business cards for a chance to take home one of 12 Taste NY gift baskets from each of the state’s Welcome Centers.

Prior to the ribbon-cutting that officially launched the trade show, more than 400 retailers, wholesalers, foodservice distributors and restauranteurs attended the keynote breakfast.  A promotional video spotlighting New York State Grown & Certified was presented to attendees to introduce buyers to the program and encourage them to look for the seal when purchasing product for their businesses.

Helen Thomas, Executive Director of the New York State Maple Producers’ Association, said, “We’re excited to join Commissioner Ball and the Department of Agriculture and Markets to promote our members, who produce 19 percent of the maple syrup in the United States and hit a 74-year record this year with 806,000 gallons of maple syrup, more than any other state except Vermont. The New York Produce Show allows us to stay up-to-date on the industry while reaching potential business partners, including growers, packers, shippers, wholesalers and retailers.”

Brian Reeves, President of the NYS Vegetable Growers Association, said, “The New York Produce show is an informative venue for buyers of produce and an opportunity to interface with the sellers, who include farmers in New York State. This helps New York farmers increase their visibility and market penetration in the New York City metropolitan area, and it helps form and strengthen relationships between buyers downstate and produce Upstate producers.”

Patty Hathaway, Retail Sales Representative for the Grape Growers Cooperative, said, “We look forward to being a part of the New York Produce Show and invite attendees to stop by, sample some of our products and learn more about our cooperative in Central New York, which is the largest, oldest Concord Grape Belt in the world.”

Nationally, New York ranks in the top 10 in the production of 30 commodities, including many specialty crops, such as apples, cabbage, snap beans, grapes, pears and maple.  The funding to promote New York’s grower community at this event is provided to the Department through the United States Department of Agriculture Specialty Crop Block Grant Fund.

The Taste NY initiative has seen steady growth and recognition since it was created in 2013. The program, which is overseen by the Department of Agriculture and Markets, has created opportunities for local producers to showcase their goods at a variety of venues throughout the State and at large public events, such as the Great New York State Fair and the Barclays Tournament at Bethpage State Park. It has also helped the farms and companies participating in the program to reach more customers, increase online sales, and, in many cases, expand the processing capacity of their business. Taste NY’s food and beverage businesses also support the State’s farmers by using New York grown and produced ingredients in their products.

New York products sold under Taste NY branding are available in more than 70 locations throughout the State as well as the New York State Office of Trade and Tourism in San Juan, Puerto Rico.