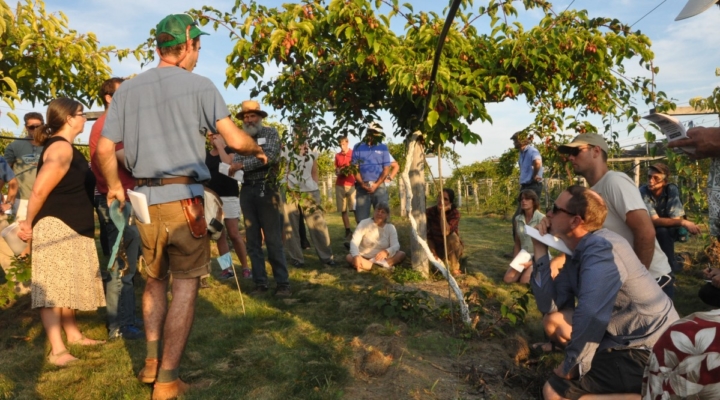 Visitors learn about kiwiberries at the 2018 Under the Vines field day at the UNH Woodman Horticultural Research Farm. (Courtesy Photo)

DURHAM, N.H. – For the first time since the USDA began keeping statistics in 1840, farmers from several Northeast states, including New Hampshire, are reporting kiwifruit production operations. The news comes six years after the New Hampshire Agricultural Experiment Station at the University of New Hampshire launched a kiwiberry research and breeding program at the experiment station’s Woodman Horticultural Research Farm in Durham.

According to the 2017 Census of Agriculture, which was released earlier this month, two producers in New Hampshire reported kiwifruit production operations, the first time the Granite State has self-reported such production to the census. Other Northeastern states self-reporting kiwifruit farms for the first time include Pennsylvania (eight), New York (seven), Vermont (five), and Connecticut (one).

Nationally, the number of kiwifruit farms increased from 345 in 2012 to 426 in 2017, but this statistic requires some unpacking. According to officials with the USDA National Agricultural Statistics Service, the term “kiwifruit” encompasses all species of the genus Actinidia, including not only Actinidia chinensis var. deliciosa, the fuzzy-skinned, egg-sized fruit most familiar to consumers, but also the smooth-skinned, grape-sized, and more cold-hardy Actinidia arguta, or kiwiberry.

According to experiment station researcher Iago Hale, associate professor of specialty crop improvement who oversees the UNH kiwiberry project, fuzzy kiwifruit dominates national production, with more than 95 percent of the total kiwifruit acreage in the United States found in California alone. However, small-scale kiwiberry production is on the rise, as indicated by the growth of kiwifruit production in northern latitudes, including the Pacific Northwest (102 farms), the Midwest (11), and now the Northeast (23).

“For well over a century, many people have recognized the potential of kiwiberry as a high-value fruit crop in our region. In 2013, we established a long-term research and breeding program to support its development in an effort to finally provide the systematic investment needed to move the species out of backyard gardens and into commercial production. The increase in reported kiwiberry operations in the region reflected in the 2017 Census is a welcome confirmation that we are where we need to be. As a commercial enterprise, kiwiberry is beginning to establish itself, and we are poised to work with and support these new producers,” Hale said.

Kiwiberries have an extensive 140-year history of cultivation in New England, first as an ornamental landscape vine and subsequently as a new fruit crop on private estates and in backyard gardens. In more recent decades, a handful of producers have experimented with field-scale kiwiberry production, demonstrating the commercial viability of the crop in the region and developing interest among researchers and consumers. They have an attractive appearance, intense and complex flavor profiles, high levels of bioactive compounds, and are easy to eat.

According to Hale and research technician Will Hastings, who manages kiwiberry vineyard, there is great potential for growth of a kiwiberry sector in the Northeast due to consumer interest, an established valuation of local produce, the area’s unique culture of direct-market horticultural crops, and the extremely low level of regional production to date.

Recently, the experiment station researchers published an online guide that provides in-depth, regionally relevant information. It is comprised of a statewide market assessment, a detailed production manual, and an enterprise analysis, Growing Kiwiberries in New England: A Guide for Regional Producers (http://www.noreastkiwiberries.com/).

This material is based upon work supported by the NH Agricultural Experiment Station, through joint funding of the National Institute of Food and Agriculture, U.S. Department of Agriculture, under award numbers 233561 and 1006928, and the state of New Hampshire.