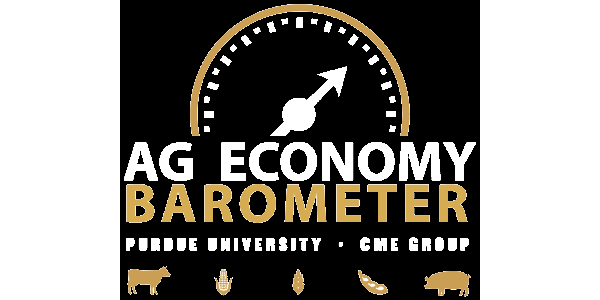 The Purdue University/CME Group Ag Economy Barometer reading declined to 124 in August, down 29 points from July.

WEST LAFAYETTE, Ind. — The Purdue University/CME Group Ag Economy Barometer reading declined to 124 in August, down 29 points from July. Farmers’ expectations for both current and future economic conditions also took a tumble. The Index of Current Conditions dropped 19 points and the Index of Future Expectations dropped 34 points in August, both compared to a month earlier. Sharp declines in most commodity prices during July and early August weighed heavily on farmer sentiment this month. While USDA’s announcement of the Market Facilitation Program (MFP) payment rates did help alleviate concerns about 2019 income for many farmers, the big decline in the Index of Future Expectations indicates farmers are becoming more concerned about the future for U.S. agriculture and their farms. The barometer is based on a mid-month survey of 400 agricultural producers across the U.S. and was conducted between August 12 and August 20, 2019, with nearly all of this month’s responses collected following USDA’s release of the August 12 Crop Production report.

In late July, USDA announced the per planted acre payment rates by county for the 2019 MFP, with payments to be made in three tranches. To learn farmers’ views regarding the MFP payments, two questions were included on the August survey: first, to what degree do $16 billion in MFP payments to U.S. farmers relieve their concerns about the impact of tariffs on their 2019 farm income; and second, in a follow-up question, do respondents expect USDA to provide payments to U.S. farmers for the 2020 crop year.

Over two-thirds (71 percent) of respondents stated that they feel the 2019 MFP program will either “completely or somewhat relieve” their concerns about tariffs’ impact on 2019 farm income. However, at the same time, nearly three out of ten respondents (29 percent) said “not at all,” indicating that a significant minority of farmers feel the MFP payments fall short of making up for income losses attributable to the ongoing tariff battles. When looking ahead to 2020, 58 percent of farmers in the August survey said they expect another MFP payment to be made to U.S. farmers for the 2020 crop year, suggesting a majority of farmers are counting on payments from USDA helping to make up future income shortfalls.

Since March 2019, questions were added to the survey to assess farmers’ perspectives on how quickly they expect the soybean trade dispute with China to be resolved and whether the resolution will benefit U.S. agriculture. Back in March farmers were almost evenly split on this issue with 55 percent indicating they felt it was unlikely, and 45 percent saying it was likely, to be resolved quickly. In subsequent months, the percentage of farmers saying they think it is unlikely that the trade dispute will be resolved soon increased, ranging from a high of 80 percent in May to a low of 68 percent in June. In August, there was a modest sentiment shift as the percentage of producers expecting resolution soon rose to 29 percent from 22 percent in July and the percentage of producers who felt resolution soon was unlikely declined to 71 percent from 78 percent in July.

When farmers were asked whether they think the trade dispute will ultimately be resolved in a way that benefits U.S. agriculture, the results have been mixed over time. In March, over three-fourths (77 percent) of farmers in the survey said they expect a beneficial outcome to the trade dispute; however, that percentage declined in May to 65 percent before rebounding in July to 78 percent. In August the percentage of farmers who expect a positive outcome to the dispute for U.S. agriculture slipped to 72 percent.

Read the full August Ag Economy Barometer report at http://purdue.ag/agbarometer. This month’s report also includes insights into whether producers feel now is a good or bad time to make large investments in their farming operations and their expectations for farmland values. The site also offers additional resources – such as past reports, charts and survey methodology – and a form to sign up for monthly barometer email updates and webinars. Each month, I also provide a short video overview of results from the barometer survey, available on the Ag Economy Barometer Barometer’s website or on the Center for Commercial Agriculture’s YouTube channel at https://purdue.ag/barometervideo.

The Ag Economy Barometer and two of its components – the Index of Current Conditions and the Index of Future Expectations – are reported on the Bloomberg Terminal under the following ticker symbols: AGECBARO, AGECCURC and AGECFTEX.

Finding new ways to beef up our cattle