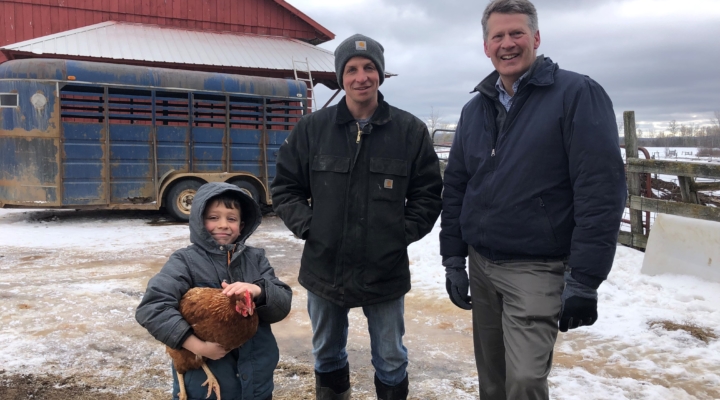 “American agriculture faces a demographic tidal wave. Forty percent of U.S. agricultural land is owned by people age 65 and up, meaning over 371 million acres could change hands over the next 15 years as farmers retire. The good news is there’s an increasing crop of Americans who want to become farmers – but finding land to farm that’s affordable and suits their intended operation is a big hurdle,” says John Piotti.

He continues, “On the other hand, senior farmers looking to fund their retirement often see selling their land to developers who can pay well as the only option. AFT works to address both these issues, helping aging farmers and ranchers take steps to keep their land in agriculture as we help new farmers find land and obtain the critical services they need to succeed. Connecting these two groups and making sure helpful programs and policies are put in place on a local, state and national level is key to the future of farming in America and one of AFT’s three core mission areas.”

BBC’s “Generation Farmer” focuses on the challenges facing new farmers around the world and highlights initiatives that are giving the next generation a helping hand. Piotti highlights the problem of land access for young farmers starting out in the United States – how someone with little or no family farming background and limited capital can make a start, or how an older farmer approaching retirement age can secure the future of his/her farm, perhaps with no heirs or with pressure to sell land out of farming.

BBC World News is the BBC’s biggest television service, operating in more than 200 countries and territories and reaching 454 million households around the world. Each week, the BBC’s global platform comprised of TV, radio and online services reaches 376 million adults.

If you can’t view the episode live you can watch it now on BBC Reel.

Consult your television provider’s guide or the BBC Schedule Website for information on where to view BBC World News in your area.

The State of New York is a leader in efforts to support a new generation of farmers. The recently adopted 2019-2020 state budget included $400,000 in funding for Farmland for a New Generation New York, a statewide program comprised of a Resource Center (www.nyfarmlandfinder.org) and an active network of Regional Navigators available to help farmers find land to farm across the state.

American Farmland Trust is the only national organization that takes a holistic approach to agriculture, focusing on the land itself, the agricultural practices used on that land, and the farmers and ranchers who do the work. AFT launched the conservation agriculture movement and continues to raise public awareness through our No Farms, No Food message. Since our founding in 1980, AFT has helped permanently protect over 6.5 million acres of agricultural lands, advanced environmentally-sound farming practices on millions of additional acres and supported thousands of farm families.

Looking for farmland or a farmer?