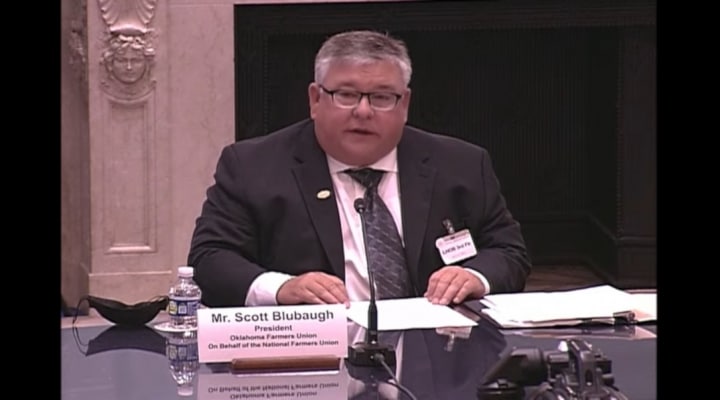 “Over the past 50 years, our food system has come under the control of fewer and fewer multinational corporations,” testified Blubaugh. “Unchecked consolidation and vertical integration have created a dramatic imbalance of power between producers and corporations, allowing corporations to manipulate the marketplace, push down prices paid to farmers and ranchers, and ultimately drive us out of business.”

Blubaugh questioned the fairness of the shift in the U.S. beef dollar, stating the “[meat]packers maximize their profits, overcharge consumers, and limit farmers like me to razor thin profit margins.”

“It doesn’t have to be this way,” said Blubaugh. “Corporate consolidation of the food system, especially the livestock sector, isn’t inevitable.”

Blubaugh also called for federal and state governments to invest in supporting more competition in marketing and processing, citing the success of a small meat processor grant initiative in Oklahoma.

“This is just one example in one state, but it’s clear the interest and the need is there to decentralize processing,” said Blubaugh. “It reduces supply chain risk, puts more funds in producers’ pockets, and creates jobs in rural America.”