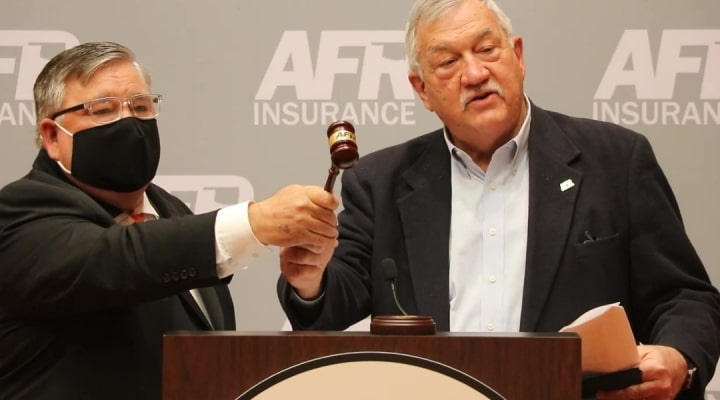 “This year’s event is unlike any previous convention,” said AFR/OFU Cooperative President Scott Blubaugh. “While we can’t bring everyone together this year, we’re glad to find a format that allows us to take care of necessary business and elect organization leadership.”

Porter is a third-generation AFR Insurance agent with more than 35 years with AFR/OFU. He served as AFR/OFU Cooperative Vice President from 2010 to 2021, opting not to run for re-election this year. He attended the University of Central Oklahoma, was a member of the Oklahoma National Guard, has been inducted into the Oklahoma Softball Hall of Fame as a player, and is a retired Oklahoma High School basketball and football referee.

The Southwest District 2 Independent Director seat did not have an incumbent—AFR/OFU Director Joe Ed Kinder retired this year and chose not to seek an additional term. In that race, Johnny Mann, Stratford, and Ethan Treadwell, Frederick, were defeated by Brett Morris, Ninnekah.

A former dairyman, Morris now runs a diversified farming and cattle operation and the Washita Fertilizer Company. He has been active with AFR/OFU since the early 1990s and currently serves as the organization’s representative on the Oklahoma Beef Council. In 2017, he was elected chairman of the Cattlemen’s Beef Board; he has been involved with the Beef Checkoff since 2007.

Landon Jestis, Bokchito, ran unopposed for the Southeast District 4 Agent Director seat. Jestis owns Jestis Insurance Agency in Durant and earned a degree from East Central University in Ada. He has a long career in the insurance industry, including stints as an independent adjuster, a property claims adjuster, and now as an agency owner.