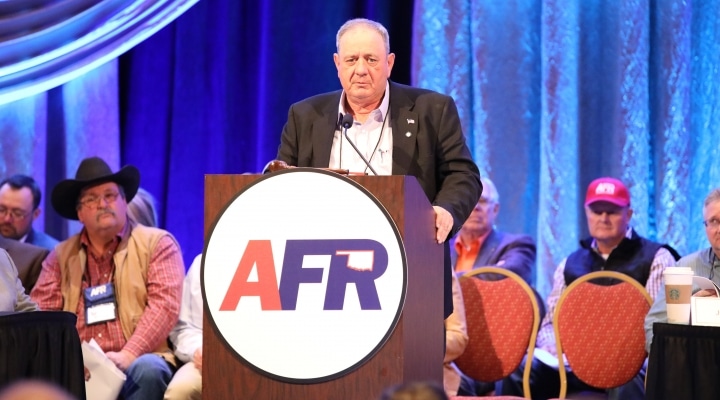 Each year, organization policy includes “special orders of business” that address recent, current or future issues of significant importance to rural Oklahoma and agriculture at large. This year’s additions to AFR/OFU Special Orders include:

Extension Education: “We support full-time extension educators in every county in Oklahoma.”

Due to the reduced number of Oklahoma Cooperative Extension Service agents in each county and the financial constraints squeezing their resources, the 2020 AFR/OFU Special Orders supports and encourages a focus on maintaining full-time extension educators in every county in Oklahoma.

Four major packing firms control more than 80 percent of all beef slaughtered in the United States. With such a controlling interested in the marketplace, these groups are poised to influence and potentially manipulate U.S. beef prices.

This issue was at the forefront of beef industry discussion during the last half of 2019 and will continue to be a major issue through 2020. In light of this, the 2020 AFR/OFU Special Orders demands proper enforcement of the Packers and Stockyards Act.

Truth in Labeling Standards: “We oppose the use of food product labeling that misleads consumers, including the use of ‘Product of USA’ labeling. We demand the USDA enforce truth in labeling.”

Cattle or beef that is imported into the U.S. and undergoes further processing or handling at a USDA-inspected facility can be labeled “Product of the United States.” Because this practice can mislead consumers, and be detrimental to U.S. beef markets, the 2020 AFR/OFU Special Orders opposes the practice and demands increased truth in labeling.

Trade Mitigation Payments: “Trade mitigation payments shall not be made to multi-national corporations or foreign entities.”

In addition to these specific directives, 2020 AFR/OFU Special Orders also includes support for the “U.S. Cattle Suit,” which accuses the four largest U.S. beef packers of violating federal antitrust law by conspiring to drive down prices.

In a related issue, the 2020 AFR/OFU Special Orders voiced support for the Farm Stress Management program spearheaded by National Farmers Union and other national agriculture groups. The program is designed to help agriculture producers cope with the financial and emotional stress that currently accompanies much of production agriculture.

Finally, the significance of the 2020 Census was also highlighted. The 2020 AFR/OFU Special Orders encouraged all AFR/OFU members to participate in the 2020 U.S. Census. Those living in rural areas were especially encouraged to participate.

Adopted AFR/OFU policy is truly grassroots—proposed policy begins as resolutions at the local and county level. Because of this approach, the organization’s policy document represents members’ interests from across Oklahoma.