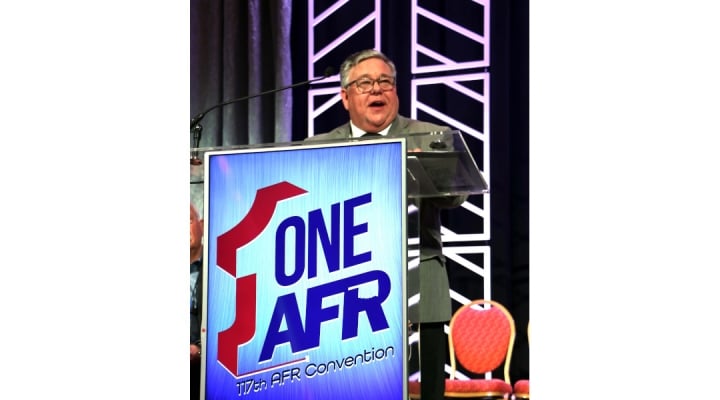 “This year’s convention theme speaks to commitment to serving both or insurance policyholders and our Cooperative members,” said AFR Cooperative President Scott Blubaugh. “We are proud of our history of service to rural Oklahoma and intend to continue serving our members for many years to come.”

This year, three seats on the AFR Board of Directors—Statewide Independent Director, District 2 Southwest Agent Director and District 3 Northeast Independent Director—were up for re-election. No challengers filed; all incumbents retained their seats. In addition, AFR Cooperative President Scott Blubaugh, Tonkawa, ran unopposed and will retain his current position for a three-year term.

Statewide Independent Director Mason Mungle, Norman, was renewed for a three-year term. Mungle has been an AFR member for more than 40 years and has a background in dairy and cow/calf operations in Southeast Oklahoma. He was a member of the first class of the Oklahoma Agricultural Leadership Program and holds a bachelor’s degree and master’s degree in animal science from Oklahoma State University. In the past, Mungle has served rural Oklahoma as director of the Oklahoma Conservation Commission, as a legislative liaison for AFR Cooperative, as president of Farmers Royalty Company, and as president of Oklahoma Chapter of the National Association of Royalty Owners (OK-NARO). He has also served on the board of the Oklahoma Agriculture Mediation Program.

District 2 Southwest Agent Director Dustin Tackett, Fort Cobb, was renewed for a three-year term. Tackett has been an AFR Insurance agent since 2004, raises commercial Red Angus cattle and grows wheat, hay and pumpkins. Tackett was a member of Class 12 of the Oklahoma Agricultural Leadership Program and holds an agricultural economics degree and an MBA from Oklahoma State University. In addition to his service to AFR, Tackett has served on the Caddo Kiowa Technology Center Board of Education since 2004 and has been board president since 2009. He has also served as president of the Oklahoma State School Boards Association Board of Directors and was selected to the OSSBA All-State Board of Education in 2015.

District 3 Northeast Independent Director Jim Shelton, Vinita, was renewed for a three-year term. Shelton retired in 2010 from a 35-year banking career with Oklahoma State Bank of Vinita. He and his wife Sara currently operate a commercial cow/calf and stocker operation. Shelton is a graduate of Class I of the Oklahoma Agricultural Leadership Program and Class XIV of Leadership Oklahoma. He holds a bachelor’s degree in animal science from Oklahoma State University and is a graduate of Southwestern Graduate School of Banking at Southern Methodist University. He serves on the Vinita Public Schools Board of Education and Vinita Public School Educational Foundation. He is also a director for Holistic Management International and the Oklahoma Grazing Lands Coalition. He served on the State of Oklahoma Long Range Capital Planning Commission and a director of the Oklahoma State University Alumni Association and Leadership Council and the OSU Animal Science Alumni Association.

In addition to elections, 2022 AFR State Convention attendees learned about timely topics such as rural issues related to the medical marijuana industry and lack of competition in the livestock industry, connected with the next generation of AFR members during the youth program, learned about the 2022 AFR Women’s Cooperative initiative and much more.

This year’s convention banquet was one to be remembered. Oklahoma Rep. Frank Lucas (R-03) was a featured speaker with an update on current affairs in Congress. The banquet also featured a presentation of the Oklahoma Farmers Union Meritorious Service Award to former organization president Terry Detrick, as well as a presentation honoring the late Oklahoma Secretary of Agriculture and AFR Director Terry Peach.