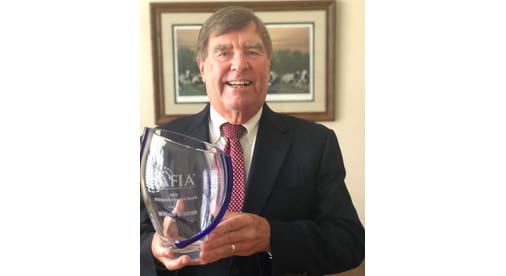 “Anyone who has worked with Bill knows how much the animal feed industry means to him – he truly put his heart and soul into everything he did to support the industry,” said Novak. “Bill’s many contributions to the feed industry, the AFIA and IFEEDER make him an exceptional choice for this honor.”

Braman has been very involved in the AFIA and the Institute for Feed Education and Research (IFEEDER), the latter of which he served as a pioneer trustee and remained on the Board until 2015. During his tenure with IFEEDER, he also served on the budget task force and research committee and played an active role for several years in the silent auction held at the AFIA’s Purchasing and Ingredient Suppliers Conferences. He served on the AFIA Board of Directors from 2011-14, AFIA’s Nutrition Committee for more than a decade, including serving in the officer rotation, and AFIA’s Liquid Feed Committee for five years. He has embraced every project with enthusiasm and a can-do attitude.

Braman has also been very active in several industry groups, including holding memberships in the American Dairy Science Association, American Society of Animal Science, Poultry Science Association and American Registry of Professional Animal Scientists (ARPAS). From 2009-11, he served as the president-elect and president at ARPAS and from 2006-09, he served as the director for the Midwest ARPAS.

Raised on a dairy and crop farm in Indiana, Braman graduated with honors from Purdue University in 1969 with a bachelor’s in agricultural education and then received his master’s and Ph.D. in animal nutrition from the University of Illinois. While at Purdue, he joined the FarmHouse fraternity and became a member of Alpha Zeta, Block and Bridle and the Purdue choir.