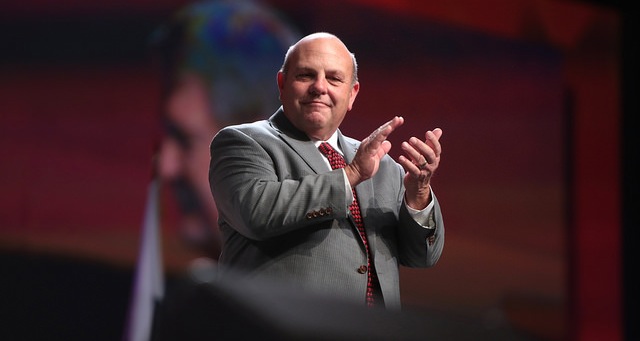 “We should not allow regulations to strangle our economy or strangle the innovation and optimism our nation needs,” said AFBF President Zippy Duvall. “Many of our farmers are at a breaking point in terms of generating income to cover the cost of production. Increased regulation raises that cost of production, and farmers and ranchers simply cannot bear that burden in today’s ag economy.” (Gage Skidmore, Flickr/Creative Commons)

WASHINGTON — The American Farm Bureau Federation’s public policy agenda shares much in common with the Trump administration on issues like regulatory reform and tax reform. But even harder issues such as farm labor and trade should present opportunities to engage with Congress and the White House, alike, AFBF President Zippy Duvall told participants at the USDA’s Agricultural Outlook Forum.

Duvall, who farms in Georgia, said America’s farmers and ranchers have to make their voices heard on “all of these issues.”

“You couldn’t ask for a finer gentleman or a stronger champion for our farmers and ranchers,” Duvall said. “I believe he could be one of the all-time great Secretaries of Agriculture. And we need him confirmed so he can get to work.”

Duvall called for a measured regulatory regime. “We should not allow regulations to strangle our economy or strangle the innovation and optimism our nation needs,” he said. “Many of our farmers are at a breaking point in terms of generating income to cover the cost of production. Increased regulation raises that cost of production, and farmers and ranchers simply cannot bear that burden in today’s ag economy.”

Duvall cited the EPA’s Waters of the U.S. rule as an example of federal overreach.

“Lowering the business tax rate will go a long way toward helping our economy. But we can’t stop there,” he said. “We need a tax code that recognizes the financial challenges farmers and ranchers face — a tax code that encourages the next generation to stay in agriculture.”

“If we can’t get the labor to harvest our crops here in the U.S., we will be importing more fruits and vegetables and other commodities from other countries,” he said. “Farm Bureau supports protecting our borders. But we can’t just do enforcement and leave our farmers holding the bag. We also need a way for the workers who have been on our farms for years and know their way around a farm to get an adjustment in status and stay here, helping us feed America with American-grown food.”

Trade – a source of roughly one quarter of all U.S. farm production — remains a matter of serious concern to farmers and ranchers. What’s more, Duvall reminded his audience, Mexico remains one of America’s largest trading partners. He said AFBF would work to address concerns in NAFTA and TPP, and announced that AFBF would be working with other farm groups to outline how Congress and the administration might address those issues and develop a plan to continue expanding trade.

Agricultural trade policy is yet another reason why Agriculture Secretary Nominee Perdue needs to be confirmed, Duvall added.

Duvall said that as the nation begins consideration of the 2018 farm bill, U.S. agriculture is in a much different place than it was in 2014, when Congress drafted the last version of the measure.

“Commodity prices are obviously much lower,” Duvall said. “Farm incomes are down. Farmers have pulled hard on their cash reserves and cut back on buying new equipment.”

“The Congressional Budget Office baseline for the farm bill has gone down,” Duvall said. “It will be very challenging to find the money to make adjustments in areas such as dairy supports and ARC payments. But we are going to keep reminding Congress and the White House that our farm economy is hurting. Agriculture has given back when we can. In fact the last farm bill made $23 billion in cuts.”

American agriculture has only asked for help when it was needed, Duvall said, and “Now,” he added, “we need it.”