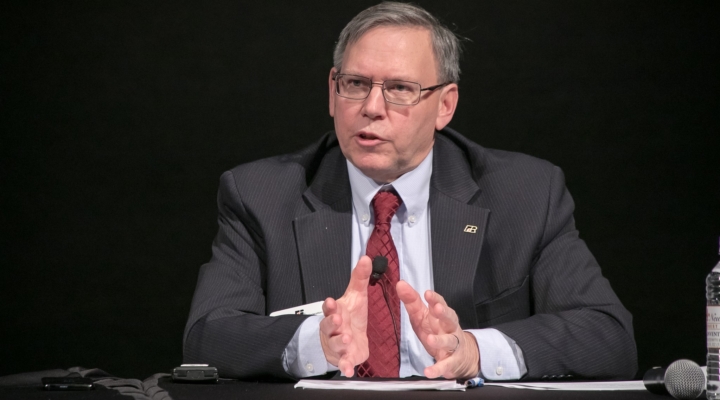 David Salmonsen, senior director of congressional relations for AFBF, said the diverse impacts of tariffs, the outcomes of free trade agreement negotiations and the future of relations with China are all critical for the future of ag exports and the growth of American agriculture. (American Farm Bureau Federation)

NEW ORLEANS — American Farm Bureau Federation policy experts gave an overview of the issues expected to affect farmers and ranchers in 2019 in a workshop at the organization’s 100th Annual Convention.

David Salmonsen, senior director of congressional relations for AFBF, said the diverse impacts of tariffs, the outcomes of free trade agreement negotiations and the future of relations with China are all critical for the future of ag exports and the growth of American agriculture.

Salmonsen discussed the United States-Mexico-Canada Agreement and outlined the process for ratification. “It could be quick or it could be slow, but there is a timeline that has to be followed,” Salmonsen said.

If USMCA is implemented, it will increase quota access for U.S. dairy products into Canada and end Canada’s Class 7 pricing. It will also keep agricultural tariffs between the U.S. and Mexico at zero.

Salmonsen said that the U.S. has also begun trade negotiations with Japan, the European Union and the United Kingdom, although the start of U.K. negotiations depends on when the U.K. completes the process of leaving the EU. He added that in any agreement, there is political bargaining that will go on over several months.

With an update on China, Salmonsen said a U.S. delegation went to China to negotiate last week, United States Department of Agriculture Under Secretary for Trade Ted McKinney and United States Trade Representative Chief Agricultural Negotiator Greg Doud. There have been no formal announcements yet from the administration, and talks are continuing.

“All of these negotiations are with major trading partners,” Salmonsen said. “These are substantive and important negotiations that we will be following very closely throughout the coming year.”

Salmonsen was joined by AFBF director of congressional relations Veronica Nigh, who discussed the economic impacts of the trade issues and tariffs, noting that exports will continue to be important to U.S. agriculture.

“Ninety-five percent of the world population is outside the U.S., so export markets will always be our opportunity for growth.” Overall, 20 percent of U.S. agricultural production is exported.

Discussing the potential impact of USMCA, Nigh said that while it is positive that the U.S. will be exporting more dairy to Canada, it isn’t going to be a major mover of the market as Canada’s total population is 36 million people and the country has a strong domestic dairy industry. But it is a positive sign for U.S. agriculture.

Nigh noted that if the U.S. were to withdraw from North American Free Trade Agreement, there would be great cause for concern as old tariffs we have not seen in 20 years could return.

Citing the impact of Chinese tariffs, Nigh said that ag exports to China were down by $2 billion in 2018, and USDA forecasts exports to decline by an additional $7 billion in 2019. China was ranked as our second-largest trading partner for several years but is projected to be fifth in 2019. Currently 99 percent of all U.S. ag products exported to China are subject to tariffs.

Summing up the impact of the China trade disputes, Nigh said that the biggest concern is that many countries grow soy and corn, and now there’s room in China’s markets for these commodities. “We could lose the market even if the tariffs eventually go away, and it would take time to restore these markets.”