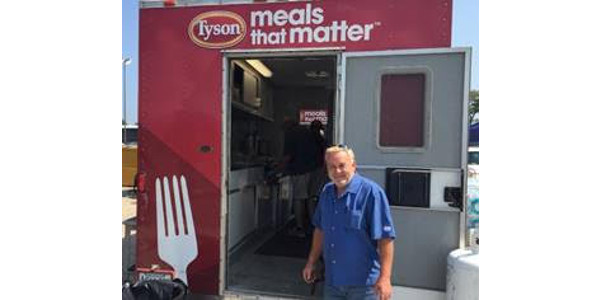 CHICAGO — In response to historic flooding in the aftermath of Hurricane Harvey, the American Egg Board has partnered with Tyson Foods to provide eggs and egg products for distribution to those affected by the disaster.

The AEB is facilitating and coordinating donations of egg patties, hard-boiled eggs, and other pre-cooked refrigerated egg products from America’s egg farmers for use in serving nutritious hot and cold meals to churches, local shelters, other locations and volunteers, as part of Tyson’s Meals that Matter® disaster relief program.

“Due to an outpouring of concern by the egg industry, AEB has commenced coordinating donations. Tyson Foods was also identified as a strong potential partner. Tyson Foods shared that supplying breakfast was an opportunity for us to engage in their efforts, and America’s egg farmers are answering the call,” said Anne L. Alonzo, President and CEO of the American Egg Board.

Pallets of egg product began arriving over the weekend with the first delivery to a local church occurring yesterday. AEB Chairman Jeff Hardin, Cal-Maine Foods was on site in Texas to personally oversee the effort. The AEB has also deployed staff to TX and has had several of its members volunteer to assist with donation and distribution efforts. Efforts are being coordinated from the Montgomery Fairgrounds, 9333 Airport Rd., Conroe, TX 77303 (about 30 miles north of the flooding).

The AEB will continue to coordinate and facilitate provision of eggs and egg products for use in the Hurricane Harvey disaster relief effort. All who are able to donate egg product, including liquid product, and other resources are encouraged to contact the AEB.