Home » Advocating for a Robust RFS 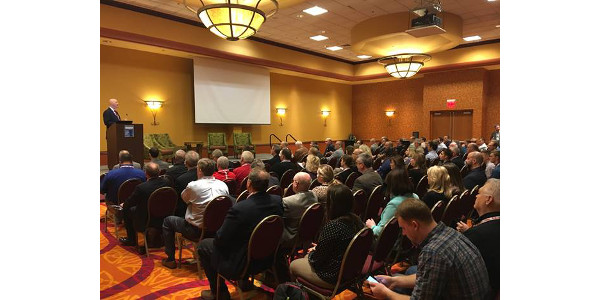 OMAHA — Governor Pete Ricketts and the Nebraska Ethanol Board teamed up to push for a strong commitment to the Renewable Fuel Standard (RFS). The Governor spoke at the Ethanol 2018: Emerging Issues Forum and discussed ethanol’s role in growing Nebraska and the importance of the RFS for Nebraska’s ethanol industry.

“Yesterday, we had a really interesting and exciting meeting where the President came out and said that he supports E15 all year round. That is a big deal. We’ve been asking for that for quite some time,” said Governor Ricketts. “Whether it’s our ethanol boards, our federal delegation, or as governors, we all have to continue to put forward that voice for our American farmers and ranchers to continue to support ethanol.”

Governor Ricketts held a press conference following his remarks at the Forum alongside Ethanol Board Chairman Jan tenBensel.

“On behalf of the Nebraska Ethanol Board, I would like to thank the Governor for his support of agriculture and the ethanol industry,” said Jan tenBensel. “Thank you for your support in Washington yesterday. This has led to the potential for year-round use of E15. This is a win-win for farmers, ethanol producers, and oil refiners.”

In Nebraska, ethanol plants use roughly 40 percent of the state’s corn crop. The demand for ethanol has increased with the introduction of new ethanol blends. Blends of E10, E15, E30, and E85 are available in Nebraska today. There are over 70 pumps with high-ethanol blends available at 19 retail locations across Nebraska.

As Governor, Pete Ricketts has served as chairman of the Governors’ Biofuels Coalition. In 2017, Governor Ricketts testified in front of the Environmental Protection Agency in support of the RFS. He also recently joined a letter with the Governors of Iowa, Indiana, Kansas, Missouri, and South Dakota that emphasized the importance of ethanol and the RFS to President Donald J. Trump.

Governor Ricketts has also directed the state fleet to replace E10 with E15 with the aim of moving to higher-ethanol blends over time. As the state fleet administrators purchase new vehicles, they have been directed to only purchase Flex Fuel vehicles or vehicles that are designed to burn at least E15 fuel.