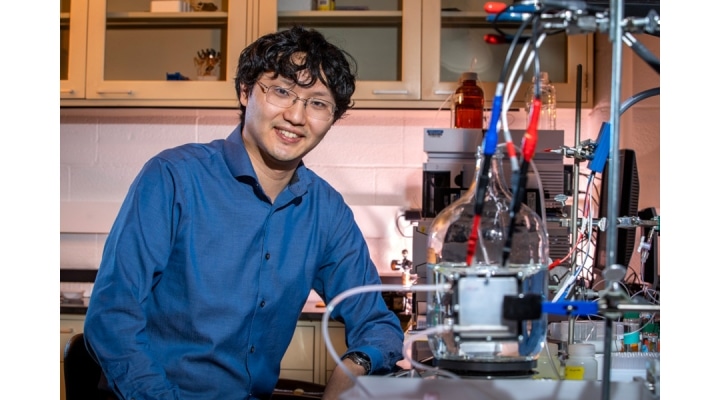 CHAMPAIGN, Ill. — Researchers say the high salt content of whey – the watery part of milk left behind after cheesemaking – helps make it one of the most polluting byproducts in the food processing industry. In a new study, chemists demonstrate the first electrochemical redox desalination process used in the food industry, removing and recycling up to 99% of excess salt from whey while simultaneously refining more than 98% of whey’s valuable protein content.

According to the U.S. Department of Agriculture, cheese consumption has soared in recent years, and projections estimate its continued growth. The study reports that cheese production contributes to roughly 83% of the total waste stream in the dairy industry. This environmental detriment, along with a rapidly increasing population need for sustainable food systems, inspired University of Illinois Urbana-Champaign chemical and biomolecular engineering professor Xiao Su to approach this challenge using advanced electrochemical technologies.

The desalination process introduced in this study uses up to 73% less energy and functions at 62% of the operating cost associated with conventional desalination systems, the researchers said. The findings of the study led by Illinois graduate student Nayeong Kim are published in the Chemical Engineering Journal.

“Although excess whey is wracked with several environmental waste problems, the food industry also recognizes it as a valuable nutrient source,” Su said. “By demineralizing the highly concentrated salts in whey waste in a sustainable manner, we can eliminate one of the environmental hazards associated with dairy processing while simultaneously unlocking access to the valuable protein resource found in whey waste.”

Su and his team approached this challenge by introducing a chemical redox-coupled dialysis system – a device that is not all that different from a battery cell. The method comprises two independently controllable channels for the whey waste and the electrodes, separated by a pair of ion-exchange membranes. Su said the process allows continuous desalination via a reversible redox reaction.

“Our system recovers valuable whey proteins without the risk of protein aggregation or denaturation,” Kim said. “Also, the molecular size of redox species is larger than the membrane pore size, meaning it cannot cross over the membrane to contaminate the purified proteins. I believe that the redox-mediated electrodialysis system can revolutionize the food industry by tackling coupled environmental and nutrition crises.”

“Remarkably, the performance of protein purification and salt recovery was maintained over multiple cycles, demonstrating outstanding stability and cyclability,” Su said. “Overall, our redox-electrochemical process offers a sustainable and electrified platform for the recovery of valuable proteins from dairy production waste, with envisioned integration with renewable electricity in the future. We hope this will be the start of research into sustainable food manufacturing in general.”

Su also is affiliated with the Beckman Institute for Advanced Science and Technology and civil and environmental engineering at Illinois. Choonsoo Kim, at Kongju National University in South Korea, and Jemin Jeon and Johannes Elbert, at the U. of I., also contributed to the study.

The National Science Foundation, the Institute for Sustainability, Energy, and Environment at the U. of I., the School of Chemical Sciences at Illinoisand the National Research Foundation of Korea supported this research.