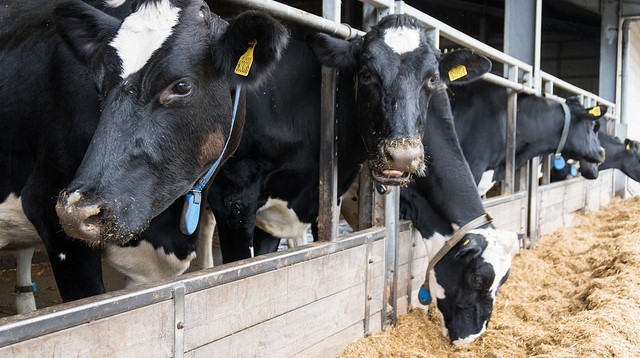 In a new study, researchers at the University of Illinois investigated the potential of injectable trace minerals to reduce aflatoxin damage and keep dairy cows healthier. (Lee Simpson, Flickr/Creative Commons)

URBANA, Ill. — When dairy cattle consume aflatoxin-contaminated feed, they are lethargic, their appetite wanes, they produce less milk, and their immune system goes awry. Some of those symptoms relate to oxidative stress, in which dangerous free-radicals bounce around, damaging cells. In a new study, researchers at the University of Illinois investigated the potential of injectable trace minerals to reduce the damage and keep dairy cows healthier.

“If we’re providing enough trace minerals to manufacture more detoxifying enzymes, the liver has a better chance of fighting the aflatoxin,” explains Russell Pate, doctoral student in the Department of Animal Sciences at U of I and lead author on the study.

Phil Cardoso, assistant professor in the department and co-author on the paper, adds that an injectable product could be helpful during aflatoxin challenge, when a cow’s appetite is suppressed. “Our idea for injecting is that it might help during a time when intake is impacted. If something is causing her to eat less, she’ll consume less of any diet-based mineral too.”

The researchers injected lactating Holsteins with Multimin®90, a commercially available injectable trace mineral formulation, twice, approximately a month apart. Another set of animals received a saline injection only, but both sets received the recommended amount of trace minerals in their diet. About a month after the second injection, the researchers used a balling gun to introduce aflatoxin-contaminated feed to half of the animals.

Cows receiving aflatoxin and saline had greater liver inflammation and lower feed efficiencies than cows that weren’t exposed to aflatoxin. But introducing Multimin®90 to aflatoxin-challenged cows increased liver concentrations of selenium and iron. It also bumped up the activity of serum glutathione peroxidase, whose job is to protect cells from oxidative damage by neutralizing free-radicals.

“As we had hypothesized, supplying cows with trace minerals via injection, independent of minerals ingested in the feed, resulted in an improved immune response and reduced oxidative stress when cows were challenged with aflatoxin,” Pate says. Trace minerals are co-factors of enzymes responsible for alleviating the oxidative stress in animals.

Aflatoxin M1 was present in all milk samples for cows that received the contaminated feed. In other words, injectable trace minerals didn’t prevent transfer of the toxin into the milk. The researchers were not surprised by the result, though.

“We knew it would not help with transference to the milk. If the cow is exposed, she needs to excrete that toxin through milk, urine, feces; anywhere to get rid of it,” Cardoso explains. “To stop transference to the milk, you have to first identify the source of the aflatoxin and avoid feeding it. But sometimes you just can’t. In those cases, we are showing for the first time that an injectable trace mineral will provide a benefit.”