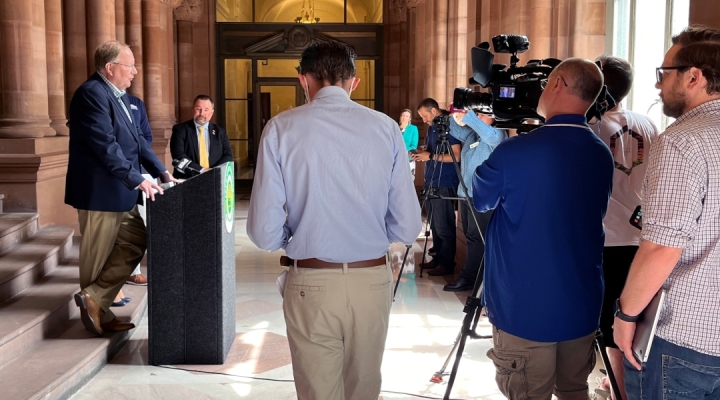 NYSAC and the business organizations cited the extraordinary challenges that farms and agri-businesses are facing to justify the rejection of the Farm Laborers Wage recommendation of a 40-hour threshold. (Courtesy Photo)

ALBANY — The New York State Association of Counties (NYSAC), the Business Council of New York State (BCNYS), the National Federation of Independent Businesses of New York (NFIB), Upstate United, and Democratic legislators Billy Jones and Carrie Woerner are calling on Governor Kathy Hochul and Labor Commissioner Roberta Reardon to maintain the overtime threshold at 60 hours on family farms across New York State. At the event held in the Capitol, NYSAC and the business organizations cited the extraordinary challenges that farms and agri-businesses are facing to justify the rejection of the Farm Laborers Wage recommendation of a 40-hour threshold.

Antonio Delgado, who was sworn in as Lieutenant Governor of New York on Wednesday, previously sent a letter to Governor Hochul to express his disapproval regarding the New York State Farm Laborers Wage Board’s recommendations. Delgado said, “Lowering the threshold over the next ten years from 60 hours per week to 40 hours per week is not mindful of the dynamics of farming.”

Paul Ruszkiewicz, Co-Owner of John Ruszkiewicz Farm, NYSAC Agriculture and Rural Affairs Committee Vice-Chair, and Orange County Legislator, said, “The cost of fuel, fertilizer, and feed are the highest they’ve been in recent memory. Add that to record inflation and rising labor costs, the next generation of farmers are seriously considering what the future holds for them in this state. Family farms across the state are taking a hard look at their businesses and are in many cases facing tough decisions as we continue to wait for a final decision on the Wage Board’s 2-1 recommendation. We urge Governor Hochul to consider the unintended consequences before forcing additional regulations on an already fragile, yet necessary industry. Any overtime threshold lower than 60 hours will result in an even greater labor shortage, and fewer contributions to regional food banks and programs like Nourish NY. Please keep overtime at 60 hours and support the next generation of farmers and farmworkers in New York State.”

Resolution from the New York State Association of Counties.

Frank Kerbein, Director of the Center for Human Resources, The Business Council of New York State, said, “New York’s diverse agriculture industry has a significant economic impact in this state, supporting thousands of other local businesses and supplying fresh milk and food to our school districts, grocery stores, and food pantries. The Business Council urges Gov. Hochul to make an informed decision based on the uniqueness of this industry, the clear message that was heard during public testimony, and farmers’ inability to simply pass increased costs on. The overtime threshold in New York State must remain at 60 hours.”

Letter from the Business Council of New York State, Inc.

Ashley Ranslow, NY State Director, NFIB said, “New York’s family farms are already facing the highest costs this industry has ever seen. Farms are reeling from inflation, diesel prices, and other input costs that continue to rise. They’re grappling with unemployment insurance taxes and a volatile global economy. Any overtime threshold lower than 60 hours will have severe negative consequences on the state’s agriculture industry and our local food supply. Gov. Hochul, now is not the time to increase costs for family farms. The overtime threshold needs to stay at 60 hours.”

Letter from the National Federation of Independent Business (NFIB) of New York.

Justin Wilcox, Executive Director of Upstate United said, “Lowering the farm labor overtime threshold will hurt farmers, farmworkers and consumers at the worst possible time. Farms are already struggling to deal with sky-high inflation, labor challenges and supply chain problems. Even if just one farm closed under this unnecessary mandate, that’s one farm too many. Farms are especially important to the Upstate economy and our communities. We urge Commissioner Reardon and Governor Hochul to make the right and responsible choice: Stay at 60.”

Mark Killmer, President/CEO of Fulton Montgomery Regional Chamber of Commerce said, “We have many farms in the Fulton Montgomery Region, most of them small, family farms that have managed to survive thru several generations. They are not in this business to get rich, but because they have a love for farming and their land. Farming is, and has always been an economic struggle, and it isn’t getting easier. This has resulted in farmers having to create new ways to adapt and survive, such as giving up farmable land for solar projects or devoting much of their land to non-traditional products. Farms live by the adage “we have to make hay when the sun shines”, and as we know, the sun doesn’t follow the same rules and timing as humans. As a result, farmers very often have to work unusually long hours by necessity. This lower overtime threshold would simply add one more barrier to the ability of a farm to continue what they love and cherish, while supplying our communities with the most basic need, nutrition.”

Resolution from the Fulton Montgomery Regional Chamber of Commerce

Assemblywoman Carrie Woerner (D-Round Lake) said, “Labor rules for agriculture must recognize that agriculture is not like other industries. Overtime rules must reflect the round-the-clock work that is necessary to keep farms working. Trying to force the agriculture industry, especially the dairy industry, to fit the mold of other industries is counterproductive and will result in irrevocable harm to consumers, farmers, and workers as agriculture in our state will become even less viable. I urge Commissioner Reardon and Governor Hochul to set aside the recommendations of the wage board and allow the overtime threshold for farm workers to remain at 60 hours.”

Assemblyman Billy Jones (D-Chateaugay Lake) said, “The number one concern among my constituents right now is being able to afford food for their families and gas for their cars. If the overtime threshold is lowered from 60 hours, it will force farmers to make difficult decisions and our grocery stores and food banks will feel the consequences. There will be fewer food donations, making it even harder for New Yorkers to put food on their tables. New Yorkers want access to fresh local produce and if the overtime threshold doesn’t stay at 60 hours, many farmers will be forced to close their doors or move out of state, which will negatively impact the food supply chain. As a former dairy farmer, I stand with farmers across New York in asking that the overtime threshold stay at 60 hours.”

Research conducted by academics and industry experts was presented to the Farm Laborers Wage Board, and links to those presentations, which include data and science-based research, are included below:

Immediately following the last public hearing on January 28, by a vote of 2-1, the Farm Laborers Wage Board members advanced a series of resolutions to lower the overtime threshold to 40 hours. The status of the Wage Board’s report to the Commissioner of Labor is unknown at this time. New York Farm Bureau President David Fisher, the lone Wage Board member who voted against the resolutions, has not been contacted about the report.