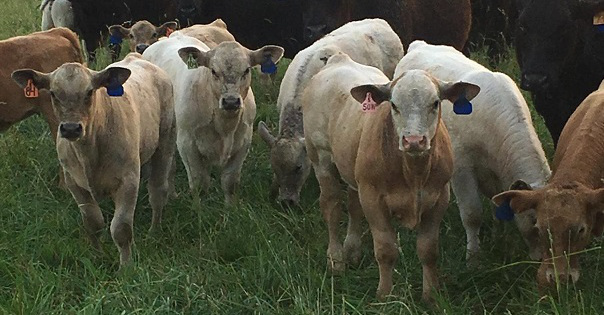 COLUMBUS, Ohio — As summer slips past us yet again and with fall rapidly approaching it is time to discuss how to maximize the value of feeder calves that will be hitting the market in late September and October. If you have been following the cattle futures both fed cattle and feeders have been on a roller coaster here as of late. With that in mind there are some things we can do management wise to capitalize on this year’s calf crop.

Weaning. Across the industry, feeder cattle sold in the fall tend to fit within one of three categories: 1) balling (zero days weaned) calves 2) calves weaned less than 45 days, and 3) calves weaned for at least 45 days. When we look at adding value, weaning calves for at least 45 days netted the highest average sale price of $916 per head, according to the annual Cow-Calf Survey conducted by Cattlefax. In the same survey calves weaned for 28 to 45 days averaged $836/head and calves shipped off the cow were valued at $829/head. The lowest value calves on average were those weaned for less than 28 days. While only making up about 7% of calves sold, these cattle average $799 per head. One could make the argument that when it comes to weaning if you are not able to wean for at least 45 days that you are better off not to wean at all, keeping in mind that a 45 day wean returns almost $100/head more. It is those short-weaned calves, that from a stress and health management standpoint pose the most problems when entering the feedlot.

Started on Feed. Having calves started on feed has about a threefold benefit at the time of sale. The first of which is that they are already used to eating out of a feed bunk. Believe it or not cattle have to be trained on how to eat out of a bunk, as they come out of pasture and are weaned. A second benefit to having calves started on grain is that as they switch to a higher energy diet it mitigates some of the stress and acidosis risk upon first entering the feed yard. In the larger feed yards cattle are fed receiving diets to aid in the transition from forage to higher energy diets, smaller farmer feeders may not have the luxury of being able to feed multiple diets. Another benefit of having calves started on feed is the additional weight gained at the time of sale. The key here, whether feeding out of a bunk or using a creep system is to not have cattle over conditioned in the fall. Over conditioned feeder cattle are more likely to be discounted at auction, than cattle that are of appropriate condition for their age.

Castration. This is one management piece that some smaller producers may struggle with due to the lack of facilities or a lack of experience in performing castration. There are a couple of options available to producers here in Ohio. Producers can either use elastrator bands or surgical castration using a knife. In a commercial cow-calf setting castrating calves earlier is typically better. Younger calves are easier to constrain and seem to experience less stress. For producers who prefer to castrate groups of cattle, running all bull calves through a chute at less than three months of age is acceptable. As a rule of thumb during a hot summer day is not a good time to castrate calves due to fly problems and potential infection. Looking at return on investment, castration can return upwards of $25 per hundredweight, especially as cattle reach heavier weights.

Vaccination Program. Vaccinating feeder calves is something we have been discussing in Extension for several years. Similar to castration, having workable handling facilities makes this task much more palatable. In the same CattleFax survey previously referenced, cattlemen indicated that by vaccinating at least twice, cattle will not receive a premium. However, those calves that have had zero or minimal vaccinations were discounted between $5 -$9 per hundredweight. For an effective vaccination program, a common recommendation is two rounds of modified live vaccine. For nursing calves, a vaccine program might include a 7-way clostridial (blackleg) and IBR/BVD/PI3/BRSV (shipping fever). An example of a preconditioning programming for feeder claves could include vaccination for blackleg, shipping fever, Mannheimia haemolytica, and Pasteurella multocida. Weaning claves at least 45 days prior to sale, creates a window of opportunity to complete two rounds of vaccinations.

Group Size. When buying for feed yards, order buyers prefer to buy larger groups of cattle due to them being more consistent. If possible, sell cattle that are the same sex, frame score, and body condition as a group. For a state like Ohio where our average herd is 17 cows, consider comingling cattle with neighbors to increase group size so long as cattle are consistent not only in phenotype, but in genetics and management practices as well. This will require some planning well in advance of marketing.

Summary. A calf that has been weaned for 45 days, castrated (if a male), and bunk broke with also having received two rounds of modified live vaccine, should be towards the top of the market report, providing they are the right type and kind. That said, if a producer does all or just one of those practices, the next step is to market those investments to potential buyers. If selling at auction, be sure to inform the auction market of what all the cattle have had vaccination wise, how long they have been weaned and how much feed they have been receiving. As a seller you would want to do the same thing if offering cattle for sale off of the farm to potential buyers. At the end of the day do what is best to maximize your return on time and investment and increase the value of your feeder cattle.