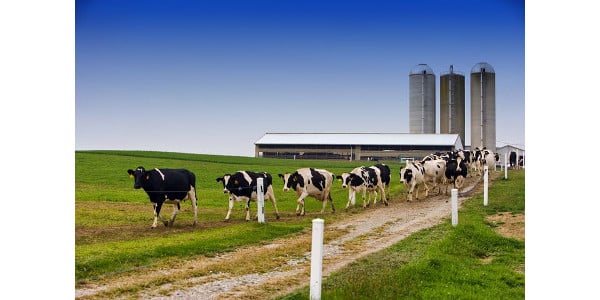 In the Center for Dairy Excellence’s latest episode of the “Cow-Side Conversations” podcast, Michelle Kirk, a former beef producer from Adams County, Pennsylvania, opened up about how the unexpected loss of her husband has affected her mental health and her future in agriculture. Throughout the episode, Michelle shared a deeply personal recount of how she coped with her grief when tragedy struck on the farm. She also shared what she has learned about succession planning and emergency preparedness. (file photo courtesy of MSU Extension)

HARRISBURG, Pa. — In the Center for Dairy Excellence’s latest episode of the “Cow-Side Conversations” podcast, Michelle Kirk, a former beef producer from Adams County, Pennsylvania, opened up about how the unexpected loss of her husband has affected her mental health and her future in agriculture. Throughout the episode, Michelle shared a deeply personal recount of how she coped with her grief when tragedy struck on the farm. She also shared what she has learned about succession planning and emergency preparedness.

Michelle opened the podcast by describing her childhood and how she met her husband. She grew up in Chester County, Pennsylvania where she lived on her grandparents’ farm until the age of 14. She eventually met her husband, and they moved to Adams County in 2000. They began leasing a family farm from her husband Bill’s parents, with the goal of buying the farm and beginning the transition process in the near future. With a rotational grazing beef operation, and about 400 rented acres where they grew forages and small grains, Michelle says she and her husband both worked full-time on the farm. They averaged approximately 90 cows in addition to their replacement heifers.

In 2012, at just shy of age 50, her husband began to slow down and experienced a stomach virus that lingered for months. He was eventually admitted to the hospital and realized he was experiencing kidney failure. Michelle also described the moment when they diagnosed him with cancer.

“When you get that word [cancer] said to you, it just makes your world stop turning. It drastically changed everything. He had to go on dialysis immediately three times a week for four hours each, so we changed our schedule and made time for that,” Michelle shared in the podcast. “He fought through it and did as much as he possibly could. He did get tired quickly and had to stop to take breaks more than he was used to. Especially during the fall season, it’s busy with harvesting. I had to step up a little more, and we were lucky to have some friends and our son to help.”

While she had support from friends and family, Michelle reflected on the new skills she had to learn to keep the farm operating throughout her husband’s battle with cancer – such as doing more of the cattle checks and learning how to use a skid loader. When an unexpected crisis strikes, Michelle also shared how important it is to be prepared with the small, daily records of the operation.

“I was really lucky because I was on the farm every day and knew most of the day-to-day operations. But there are so many farm families where one or both parties have to work off the farm to make ends meet,” she explained. “When something happens and a person can’t tell you what they do, it becomes an emergency situation. You need to have record of who the vet is, who hauls your milk and cattle, or who repairs your equipment. You need to know those things, and they need to be written down. Knowing what the other hand is doing is very important.”

Her husband eventually had a successful stem cell transplant, went into remission, and found his strength coming back. Michelle discussed the financial toll the cancer took on their family, but shared how they believed transitioning the farm was still in their future.

“Things really started to be normal again … if you would have met him [then], nobody would have ever known he was sick. We were getting caught back up because, of course, things financially took a little bit of a hit. We couldn’t deliver hay and straw like we normally did,” she added. “We started to think about transitioning the farm again and going down that path. But then he came out of remission fast and furious. It was pretty much in a matter of days.”

After going through multiple rounds of treatment and dialysis, and lengths of time where he was in remission, Michelle shared that her husband eventually lost his battle with cancer. His father passed away approximately three months later. While she tried to cope with the unexpected grief, she still believed farming was in her future. As Michelle worked to build a business plan for transitioning the operation and determine her next steps, she reflected on the moment she heard a realtor was visiting to take photos of the family farm and list it for sale.

“I was still in the deep pit of grief from losing Bill and barely seeing the light. At that moment, I was pretty sure the light at the end of the tunnel was an oncoming train. I was trying day by day – sometimes hour by hour – to keep going,” Michelle said. “It was only about eight months after losing him that I got that phone call [about the realtor]. It set me way back because I didn’t know what I was going to do. I didn’t know anything else. I had been with Bill for 20 years, so my plan was to continue farming.”

About a year after losing her husband, the farm was sold and Michelle moved off the operation. Based on her experience, she encouraged other farm families to make sure they have a succession plan in writing.

“Communication is key with succession planning. You have to talk amongst yourselves, with both the outgoing generation and incoming generation. You have to be open and know what each other is thinking and understand what the timeline looks like,” Michelle said. “We didn’t really have that other than his parents knowing we wanted to buy [the farm]. It was all verbal, and there was nothing in writing. Get it in writing. You just never know what might happen.”

Michelle also described how the tragedy impacted her mental health and how important it was for her to have a support system. Her son and her friends showed up, were there to listen, and helped lift her spirits.

“I don’t think I realized how depressed I was and how I looked to everyone else. But one day my son and I were talking. He put his hands on my shoulders and said, ‘Mom, I can’t lose you, too.’ That was a light switch. I didn’t ever have thoughts of suicide, but apparently it looked that way from the outside,” she shared. “My son and friends didn’t really ask if I needed help. They just showed up. Sometimes all you need is someone to come sit next to you quietly and be there so you’re not by yourself.”

Michelle reflected on some of the other mental health resources she used during the grieving process, including a grief counseling group and a family doctor who helped prescribe her with medication to help with sleep. She also discussed some of the coping methods she uses, to this day, to help her through tough moments.

“I was always a positive person, but I started to see in myself how negative I was. I wasn’t smiling anymore, and that’s not who I was. I started to recognize that I wasn’t happy, and I didn’t want to be like that anymore,” Michelle shared. “I gradually started pulling myself out of it and tried to compartmentalize my grief. Grief is never gone, and it’s something that will live with you forever. But I tell it where to live now instead of it being in charge. I don’t let it run the show anymore.”

Today, Michelle continues her passion for Pennsylvania agriculture by working for the Pennsylvania Farm Link and the Center for Beef Excellence. She works with other farmers to help them build succession plans before emergencies happen and shares her story to help remove the stigma from mental health.

“I’ll be the first to admit that it’s not easy [to talk about]. It’s easier to talk about your stomach not feeling good than when your brain isn’t feeling good, but there shouldn’t be a stigma around it,” Michelle added. “Don’t be ashamed if you feel depressed. Farming is a hard job, and there’s so much stress from just being at the mercy of the markets and the weather. It helps immensely to talk about your problems and get the words out there. It helps you move forward when you can talk about your experiences.”

To listen to the full podcast interview, visit www.centerfordairyexcellence.org/podcast. The podcast is also available on Spotify, Apple Podcasts, and Amazon Music. With a new episode released each month, Michelle’s interview is the seventh episode in the second season. The podcast was designed to share real-time farmer insight, tricks of the trade, and inspiring stories from dairies across Pennsylvania.