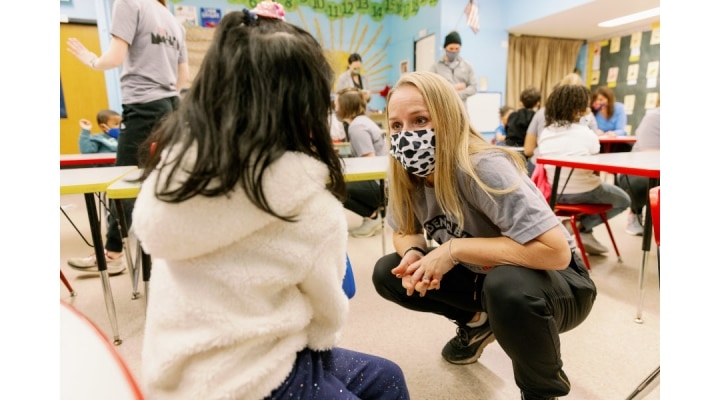 As part of a fall campaign anticipating news that chocolate milk would be challenged in school meals, dairy farmers, including Johanna Bossard from Barbland Dairy, Fabius, N.Y., went to PS 146 School in Harlem to meet with students and school administrators to promote milk as an integral part of healthy school meals. (Courtesy Photo)

SYRACUSE, N.Y. — Recent headlines out of New York City have focused on newly-elected Mayor Eric Adams and his drastic approach to healthy eating. Adams has been quoted that he wants to remove chocolate milk from New York City schools, make “Vegan Fridays” a reality for school menus, and compared eating cheese with heroin addiction.

“While dairy checkoff is not permitted to lobby or be involved in regulatory matters, our organization has solid relationships with school food nutrition professionals, registered dietitians, and anti-hunger associations, and we know they are not in favor of any move that would limit options on the school menu,” said ADA North East CEO Rick Naczi. “In addition to our direct-to-consumer marketing programs, our plan is to leverage those relationships and provide intel and data to groups that are able to address this issue through political tactics.”

Chocolate milk has been a target for school districts for years, and several attempts to remove it from the school meals programs have been defeated with a similar partnership strategy over the past several years. That’s why ADA North East has worked diligently to develop relationships with sports nutritionists and to make chocolate milk the official beverage of state athletic associations throughout our region to rally both adult and student support of chocolate milk.

One of the challenges with keeping chocolate milk on the menu is that it’s a decision a district can make without seeking outside approval.

“A school can meet their obligation to the U.S. Dietary Guidelines without offering chocolate milk,” said Naczi. “Right now, those guidelines are what’s keeping milk on the menu even as part of a vegan meal offering.”

Moving forward, ADA North East anticipates there will be opportunities for farmers to support this effort, whether working through regulatory partners, such as NMPF and New York Farm Bureau, to outreach legislators directly or to help amplify positive messaging about the nutritional benefits of chocolate milk and dairy foods in children’s diets.

If you have questions, please contact Beth Meyer, director of consumer confidence for ADA North East, at bmeyer@milk4u.org, or at 315.491.3892.