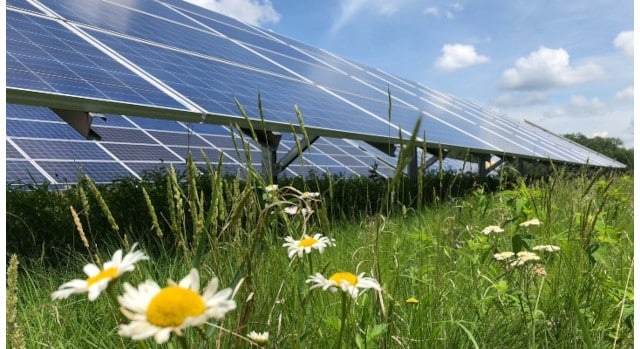 As New York strives to meet ambitious renewable energy goals to achieve net-zero carbon emissions by 2050, demand for farmland to host utility-scale solar arrays across the state is increasing. In 2021, AFT led a research project that convened an expert advisory group and surveyed and solicited feedback from hundreds of upstate farmers, land trusts, local officials, and other stakeholders, including New York’s solar industry in coordination with the Alliance for Clean Energy New York (ACE-NY), to gain a clear picture of the impact solar development may have on farm communities throughout New York.

Led by these findings, AFT then engaged stakeholders and incorporated feedback into the development of a comprehensive agenda to achieve smart solar siting in New York. This agenda includes a three-step solar siting framework and supporting recommendations designed to encourage solar developers to avoid, minimize, and mitigate impacts to farm communities, and to protect farmland. AFT believes New York State, with its nation leading clean energy targets, should institute these best-in-class approaches to protect farmland and benefit the farm communities in which solar is often sited. Additionally, the report outlines opportunities for dual-use solar, such as grazing sheep and growing crops beneath panels, to strengthen the economic benefits for farmers and keep active farmland in production while producing renewable energy.

“The trend of farmland loss to development has been troubling for decades. While New York needs to take swift climate action, we must do so in a way that supports the continued ability for farmers to produce the food, fuel and fiber we need,” said Samantha Levy, Climate Policy Manager for AFT. “With the passage of recent climate legislation, the swift growth of utility-scale solar in New York is bringing with it both threats and opportunities for our farmers and farmland. Throughout this project, it was critical to our team to learn from stakeholders on the ground and other experts who could illuminate both expected impacts, and the right solutions. AFT hopes that federal, state, and local governments officials and developers will implement the framework and the recommendations made in this report. This impending energy transition is taking place now—and we cannot afford to wait.”

More information, including the report and its detailed findings and recommendations, can be found on AFT’s Farmland Information Center. In addition, on Thursday March 3rd from 12:00pm to 1:30pm AFT will be hosting a webinar to share the findings of the report in detail and answer questions from the public. Register for this upcoming webinar here.

“Smart Solar Siting on Farmland” was made possible with funding from the New York State Conservation Partnership Program (NYSCPP) and New York’s Environmental Protection Fund. The NYSCPP is administered by the Land Trust Alliance, in coordination with the state Department of Environmental Conservation. Additional support was provided by The Ida and Robert Gordon Family Foundation and members of American Farmland Trust.

David Kay, Senior Extension Associate in the Department of Global Development at Cornell University, said, “The American Farmland Trust has helped to set the table in New York for better focused and informed consideration of our State’s evolving energy policy and its possible effects, both positive and negative, on agriculture.”

Joe Lawrence, Forage Systems Specialist with the Cornell CALS PRO-DAIRY program, said, “Renewable energy is incredibly important to our future; however, as a competing land use presents potential threats to agricultural sustainability and local economies. Understanding the findings and recommendations in this project are critical to balancing energy goal with the environmental and economic sustainability of one of the state’s largest economic engines.”

Echo Cartwright, Director of Climate Mitigation for The Nature Conservancy in New York, said, “Identifying and implementing smart siting solutions to encourage the use of clean energy technologies such as solar are critical to protecting our natural resources and managing our lands and open space. The recommendations put forward in American Farmland Trust’s report are sound, science-based solutions to protect our high-quality agricultural lands, while identifying ways in which New York’s farming community can promote the use of solar to meet the state’s clean energy and climate mitigation goals. The hierarchal approach used by the AFT compliments the ongoing smart siting work of The Nature Conservancy, and we look forward to working with our partners at the AFT and the broader farming community in promoting these findings.”

Kaitlin Hollinger, Policy Manager for BlueWave Solar, said, “AFT identified a need to bring stakeholders together and share best practices for preserving farmland and improving farm viability across the state. This report lays out important considerations for designing and incorporating market mechanisms that incentivize agrivoltaics. We were thrilled to be a part of the Advisory Committee, and look forward to continued progress on dual-use that will empower farmers, especially farmer-renters, and strengthen our rural economies.”

Bill Jordan, Founder & CEO, Jordan Energy & Food Enterprises, LLC, said, “The pace of solar adoption towards ambitious goals we all agree upon and the aggressive pursuit of prime locations for lowest cost incorporation onto the grid should not push farmers and prime farmland into retirement.  AFT’s efforts to convene constructive conversation towards optimal policy implementation is to be commended. We partner on solar with family farms to accrue maximum value to them.”

Andrew Zepp, Executive Director of the Finger Lakes Land Trust, said, “Agriculture is vital to our Finger Lakes region. Moving forward, we must balance the dual priorities of protecting our best farmland, while accommodating much needed renewable energy projects.  Developing a mutual understanding among the spectrum of stakeholders involved will be essential in order to build effective partnerships and craft policies that will protect our agricultural resources while allowing New York state to meet its climate objectives.”

Matthew Halladay, Land Conservationist for Genesee Valley Conservancy, said, “In recent years, solar development on working landscapes has become a financially viable option for landowners that can create needed renewable energy in the Genesee Valley. Realizing these benefits, however, takes a deep understanding of the complex issues that surround private land decisions in agricultural communities that depend on having productive soils available for continued agricultural. American Farmland Trust took great care in dissecting the nuance that exists at all levels, and in doing so, have created the foundation for solar siting that adds greatly to the opportunities that exist in our State.”

Katie Malinowski, Executive Director for Tug Hill Commission, said, “The Commission’s work with Tug Hill’s towns and villages on land use planning and zoning has highlighted the importance of smart solar siting. Balancing the development of renewable energy projects with maintaining agriculture as a vital part of the economy and landscape is critical. Through the commission’s participation in the AFT stakeholder process, we have worked hard to bring the rural municipal perspective to the table. We hope the analysis and recommendations provided will assist New York State, counties, towns and villages as they continue to address increasing community and utility-scale solar development.”

American Farmland Trust is the only national conservation organization dedicated to protecting farmland, promoting environmentally sound farming practices, and keeping farmers on the land. Since 1980, AFT’s innovative work has helped to permanently protect more than 6.5 million acres of farmland and ranchland and led the way for the adoption of conservation practices on millions more. No Farms, No Food. Learn more at www.farmland.org.