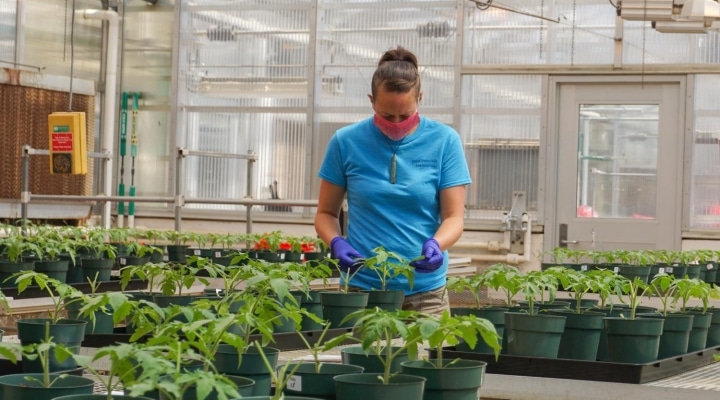 Microbial communities naturally living on the leaves and stems of tomato plants can be manipulated to suppress diseases that reduce productivity, according to Penn State researchers, offering hope that growers someday can apply these mixtures of bacteria and fungi to protect plants and improve harvests. (photo by Penn State University)

UNIVERSITY PARK, Pa. — Microbial communities naturally living on the leaves and stems of tomato plants can be manipulated to suppress diseases that reduce productivity, according to Penn State researchers, offering hope that growers someday can apply these mixtures of bacteria and fungi to protect plants and improve harvests.

In a new study that involved a greenhouse full of four lines of young tomato plants representing different treatments and control groups, researchers repeatedly “passaged” or transferred microbes — initially gathered from leaves of healthy tomato plants in the field — from one plant to another, which were subsequently inoculated with the bacterial speck pathogen.

After multiple transfers or passages of the microbes, disease symptoms such as brown-to-black lesions on leaves began to wane and, by the ninth passage, declined by nearly half.

This discovery has implications beyond tomato and even vegetable plants, suggested Kevin Hockett, assistant professor of microbial ecology in the College of Agricultural Sciences, who is a co-author on the research paper. The goal, he said, is to develop a process that enables growers to employ microbial communities in the field.

“We’re trying to find a way that we can use the natural ecosystems in the fields to benefit farmers and prevent plant diseases, and I think there’s a lot of potential here going forward,” he said. “We’re working with bacterial diseases now, but I don’t see any reason why we couldn’t test this with fungal diseases as well as other bacterial diseases in other vegetable crops. This may be an approach that can be applied widely and change the way we think about biological controls, even for other crops.”

The suppressive effects of microbial communities in the soil on plant diseases are well known, noted lead researcher Hanareia Ehau-Taumaunu, who will graduate in August with a doctoral degree in plant pathology, but this was the first study to show that microbial communities could play a similar role in the above-ground portion of plants, in the “phyllosphere.”

To develop phyllosphere microbial communities capable of suppressing bacterial speck of tomato — caused by a pathogen called Pseudomonas syringae pv. tomato, or Pto — Ehau-Taumaunu and Hockett sprayed hundreds of plants with the meticulously prepared microbe applications followed by pathogen inoculation — and then measured the severity of plant disease that developed. Those plants with the lowest disease severity then were selected as the microbial community source in the next round of inoculation.

“The successive passaging of the microbial community between tomato plants was analogous to season-to-season transfer of microbes repeatedly exposed to Pto, enabling ecological and evolutionary processes to occur across a short time,” Ehau-Taumaunu said. “The disease buildup in the phyllosphere ultimately resulted in disease suppression as a normal ecological response to pathogen pressure.”

In findings recently published in Phytobiomes Journal, the researchers reported that overall, greenhouse passaging resulted in an increase in disease severity for all passage lines from the initial passage, which peaked at passages four or five, followed by a sharp decline that was maintained through the ninth and final passage of the study.

COVID made conducting the research much more challenging and the work more demanding, Ehau-Taumaunu pointed out. She performed the complex experiments without help from undergraduate or graduate students because of restrictions aimed at preventing the spread of the virus.

“The plan was to have multiple hands involved in the transfers, but it turned out to be just me performing the entire experiment over months,” she said. “It was unfortunate, because the research would have been a great learning opportunity for other students in the Hockett lab, but I was doing this in 2020, when Penn State was just starting to come back and be able to have research happening on campus. For safety reasons, I was working alone, helped only by the greenhouse managers.”

The Northeast Sustainable Agriculture Research and Education program, the U.S. Department of Agriculture’s National Institute of Food and Agriculture, the Pennsylvania Vegetable Growers Association, the College of Agricultural Sciences, and the Huck Institutes for the Life Sciences at Penn State supported this work.