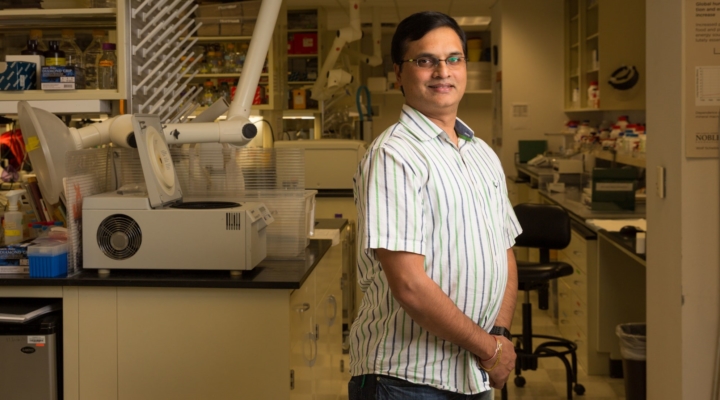 Kiran Mysore, Ph.D., professor and principal investigator, has been named a Fellow of the American Association for the Advancement of Science. (Noble Research Institute, LLC)

ARDMORE, Okla. — Noble Research Institute professor Kiran Mysore, Ph.D., has been named a Fellow of the American Association for the Advancement of Science (AAAS) — the world’s largest general scientific society. Election as an AAAS Fellow is the highest honor bestowed by the organization.

This year, 443 members from around the world were selected as Fellows because of their scientifically or socially distinguished efforts to advance science or its applications. New Fellows, who are nominated by their peers, will be presented with an official certificate and a gold and blue rosette on Saturday, Feb. 15, 2020, during the AAAS Fellows Forum during the 2020 Annual Meeting in Seattle, Washington. This year’s Fellows were formally announced in the AAAS News and Notes section of the journal Science on Nov. 29, 2019.

As part of the Biological Sciences section, Mysore was elected as an AAAS Fellow for his distinguished contributions to the field of molecular plant-microbe interactions, particularly in the area of non-host resistance and for developing genetic resources for plant functional genomics.

The tradition of AAAS Fellows began in 1874. Currently, members can be considered for the rank of Fellow if nominated by the steering groups of the Association’s 24 sections by any three Fellows who are current AAAS members (but not affiliated with the nominee’s institution) or by the AAAS chief executive officer.

AAAS was founded in 1848 and includes more than 250 affiliated societies and academies of science, serving 10 million individuals.