Home » A Washington board game, the holidays, and Paul Harvey
rural life quirky 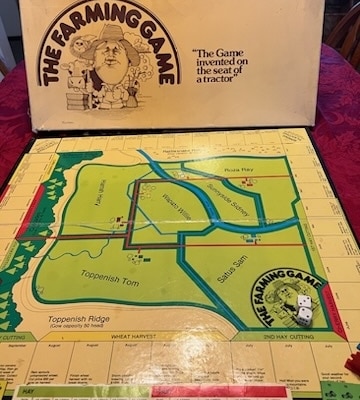 OLYMPIA, Wash. — Mom picked up our family’s copy of The Farming Game at Cenex in Quincy. I always wanted to be “Roza Ray” or “Sunnyside Sidney” – two of the six Central Washington-themed names of the farmers in the game. The beat-up box and the odd missing piece testify to the fact that playing the board game was a popular pastime in our household. Only during the winter, of course, when the relentless list of farm and garden tasks took a seasonal reprieve.

Apparently, we are gluttons for punishment.

Unlike Farmville, where there is almost no way to lose and the cows will wait until you come home, The Farming Game keeps it real. The cows get out. Hail ruins your crops. It’s 114 degrees in the shade.

While you can get rangeland, but there is a limit to how much cattle it can hold. High-priced fruit crops are high value but also high risk. Fate throws unexpected twists at the farm dream.

At least the way we played, it also never ended. Like real farmers, we played until we just got tired of it, or we went broke. Whichever came first.

The game itself really was invented on the seat of a tractor – just like it says on the box. After several years of initial success when they started farming in Central Washington, the Rohrbacher family was struggling to keep the farm afloat when their Goldendale ranch, which normally received over 20 inches of rain a year, received only five inches one year. The next, less than three.

With a third child on the way, the Rohrbacher family’s dream of returning to the land to farm was drying up in the summer of 1979. But that July, an idea sprung up in George Rohrbacher’s mind, cultivated by the smell of fresh-cut hay as he cut alfalfa in the pre-dawn hours.

The idea – “the crazy idea” his wife Ann said – was to create a Monopoly-like board game about farming to save the family farm. Knowing that the most likely time for board game sales would be the holidays, the family set to work sourcing and assembling the game in time for the holiday sales rush. They literally bet the farm to do it – selling off half of their cows to pay for the board game materials and putting every penny they had into amassing 10,000 games.

Had George not been a natural marketer, that may have been the end of their farm, the game, and their life savings. He did everything from taking the game to farm shows and small-town shops to writing President Jimmy Carter and Paul Harvey, a radio show host popular in many rural communities at the time.

While the President returned a mimeographed “thanks for your letter” note, Paul Harvey did mention the game on his nationally-syndicated radio program. Although the Rohrbacher family never heard it themselves, there was a sudden uptick in sales and customers reporting they heard about the game on the radio.

The Paul Harvey push came just in time. By Christmas, they had a newborn, sold 7,000 games, and had earned enough to keep the farm afloat. Income from game sales continued to support the farm for years.

The game was an immediate hit in farming communities where George peddled it. The farm families enjoyed the game but also appreciated how it accurately reflected the struggles of real farm life. Soon, teachers also saw the value in the game as a fun way to demonstrate to students how economics and real-world businesses work.

The Rohrbacher family was not the only farm hit by hard times. Increased prices and interest rates – much like today – made farming difficult to sustain, even for families who had been farming for generations. Tractors took to the streets in D.C. At one point, the game was given to every member of Congress to help them understand American farmers’ challenges at the time. George himself would even eventually become a Washington State Senator.

The game has also spread beyond America’s own borders. In 1994, the World Bank flew George to Russia after the fall of the Soviet Union to oversee the translation of the game into Russian. There, the game was used to help farmers understand farm privatization after the end of socialism.

The Farming Game has been available for over forty years, now sporting an updated green box as opposed to the original tan. It was adapted for Windows and Macs but the electronic versions appear to no longer be available.

Interest in the game continues, having sold over 350,000 copies. Hard times seem to increase sales according to George – with increases in times of economic downturn and during the COVID-19 pandemic. The Rohrbacher family was even featured on The Last Archive podcast recently, discussing the game and the impact it has had. (Please note: The podcast contains a small amount of language or subjects that some listeners may find objectionable.)

The Farming Game brings up nostalgic memories for many a farm kid and anyone else lucky enough to have played the game, even though they knew nothing of the hard times that inspired the game, how it saved a family, or just how widespread the game’s impact has been. But now you know…the rest of the story. 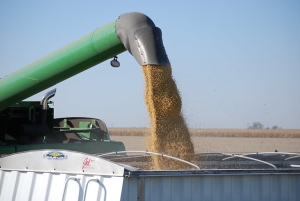