Subscribe
Home / Just Me, Kate / A Tie-Stall Barn at Night 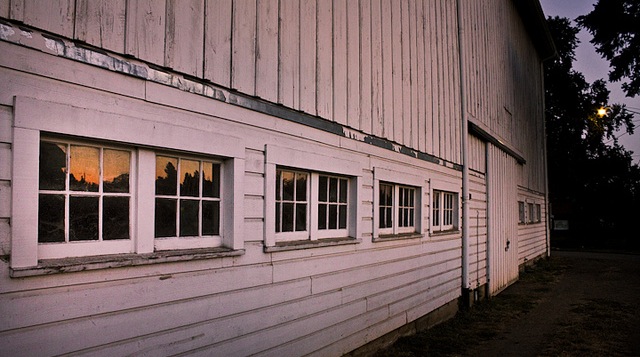 GREENWICH, N.Y. — A few weeks ago, the kids and I were driving home when we passed by an old abandoned dairy barn that was clearly a showstopper back in the day. You know the type I am talking about. Barn red, small square, white trimmed windows and a milk house attached on the front with a neatly white painted door.

I sighed and said something to them about how I missed the days of milking in a tie stall barn. Of course they asked why, and I replied, “because it’s just so cozy at night.”

And there was silence, as all three of them stared at me.

So I went back…

The steam spilled out into the snow as I opened the milk house door with my foot clad in its black Tingley rubber boot. Once inside I set down the stack of black calf buckets that I carried in my arms, and was immediately greeted by the moist warmth that enveloped me upon entry.

The moan of the milk pump marched on, bouncing off the walls inside the small cement floored room. I picked up the white handled scrub brush and reached for the hose next to the stainless steel sink.

I stuck my well washed, pruned hand into the detergent bag and pulled out a measuring cup of white granules and sprinkled them carelessly over my pails as I began washing and stacking them one by one on the drying rack.

Stainless steel pipes and the old, deep double-sided wash sink sat in the far corner and the sparkling bulk tank reached deeply into the small room.

The familiar smell of dampness filled my nose. I looked down at the pool of water that had settled where the cement had been worn away from years of hose pressure that had washed over soiled boots, bucket milkers, and calving chains.

I pushed my way through the swinging door and was greeted by the familiar faces of the cows, foraging through their hay as they sought out one more pellet of grain.

The hint of fresh wood smell from the newly spread sawdust came at me while the clunk of the grate sounded as I walked over the gutter cleaner.

The steady rhythm of pulsation filled the barn and a milker was suddenly kicked off by a fresh heifer over in the corner. She still had that wild look in her eyes, as she was adjusting to her new life in the milking string on both ends of the day.

I ducked over, under the fan and rested my hand on her rump, helping the farmer steady her as he stuck the kicked off teat cups back on.

The cats scurried from stall to stall in search of the leaking udders where they could find milk pooled underneath and lick up every drop before the sawdust soaked it up.

Hanging on the old whitewashed post, a blue iodine cup dangled on a nail and the country music station played in the background.

Heifer milked, the end is near and supper is in sight. I head back out into the barnyard to the calf hutches where I have just a few more pails to gather and wash up…

I trudged back to the milk house, toward the warmth of the light, streaming out through the square windows and the moan of the milk pump. It’s familiar, regular, and the same…

With my empty 5 gallon buckets in hand, I looked up as the sound of the pump suddenly stopped. Milking was over. My eyes lifted toward the vast, cold, star-filled sky above and I breathed in, fulfilled. Another day has passed, another to begin tomorrow… I knew, that this wouldn’t be forever.

My children will know milking parlors and heated shops, fancy calf barns and trailers that sit outside the milk house and get picked up daily. Years from now they will look back and remember too.

They won’t have my memories, but they will have their own that conjure up that warm, nostalgic feeling that way back when, there was comfort, simplicity and heart.

Oh, how I love a tie-stall barn at night…