Home / Michigan / A summary of sauces from Mich. poblano peppers
A new user experience is coming! We'll be asking you to login to your Morning Ag Clips account March 1st to access these new features.
We can't wait to share them with you! Read more here. 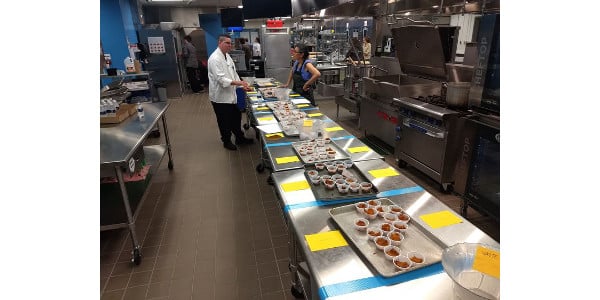 EAST LANSING, Mich. — In 2018, Michigan State University grew eight varieties of poblano peppers and one cross between a poblano and another type of Mexican chile pepper (WI Wroaster). The goal was to evaluate early ripening of these varieties for processing into traditional Mexican dishes. Green poblanos are the unripened fruits that are probably more familiar to consumers as a stuffing pepper when making chile relleno. Similar to cucumbers or zucchini, they are often eaten before the seeds mature. Ripe poblanos are sweeter than bell peppers with a slight spice (compared jalapenos). When they reach this level of ripeness, they make great sauces. In our trial, we tested nine varieties for yield, agronomic characteristics, ease of drying and taste.

Hilda McShane, a collaborating sauce-maker from Genesee County, took a sample of all of the dried poblano varieties that were planted and made an enchilada sauce out of each variety, and also included an imported dried poblano from Mexico (MX Ancho). Then, she incorporated the sauce from each variety into enchiladas in 9-inch by 11-inch baking pans. Students from the Genesee Career Institute culinary program assisted with this. McShane assigned numbers to each variety for blind sensory evaluations conducted on May 29, 2019 in Genesee County among the Genesee Career Institute students and staff, and on June 15, 2019 at the Downtown Saginaw Farmers Market with the general public.

Each participant was asked to score five metrics on a scale of 1 to 9, with 9 being the best. The metrics were color, aroma, flavor, texture and bite. Ideal sauce color is rich reddish-brown. Aroma and flavor should lend an earthy, sweet and slightly spicy effect to the enchilada. Texture should be porridge-like, not too runny or chunky. Bite is a personal preference of heat or spice that lingers in the mouth after eating.

The scores for each metric were then added for a total score. We did not weigh any one category. McShane received 101 completed sensory evaluations and input the data with help from a local high school student. MSU took the sum and mean of the overall scores across all 101 surveys. Rankings were generated by tallying the frequency that a variety was scored higher than another or tied with another. The table below shows this data.

When it came to individual components of the sensory evaluation, the radar graph below shows how each variety averaged for each metric. The somewhat nebulous grading metric of “bite” appeared to have a large effect on the overall scores, with a wide variation. Participants were asked to measure bite as a spiciness level that they enjoyed, which is a polarizing thing to measure.

So, did the best varieties in this post-harvest sensory evaluation match up with the best varieties for production? Capitan was the earliest poblano variety to turn red in our trials, and was the third highest yielder of ripe fruit, at 1.38 ripe fruit per plant and 0.27 pounds per fruit. Wisconsin Wroaster, while not a true poblano, is a specific cross between a poblano and another pepper to advance ripening in Wisconsin, and it yielded four ripe fruit per plant at 0.14 pounds per fruit earlier than Capitan. Baron was one of the later ripening poblanos and was the highest producer of “breaker” fruit, stuck halfway between green and red, on the last harvest of the season with 2.66 breaker fruit per plant at 0.30 pounds per fruit.