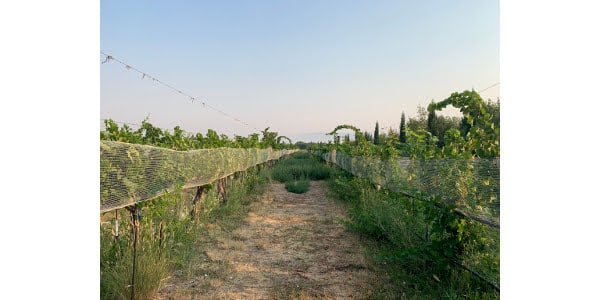 GRAND JUNCTION, Colo. — With grape harvest coming to an end, we are reflecting on what a year 2020 has been for us all, even the grapes in Colorado! However, despite many challenges, it has been a successful year. It all started when the 2019 harvest ended abruptly due to a cold front moving across the state in the beginning of October while fruit was still on the vines. Not only did this compromise the 2019 harvest, but it could have potentially affected the 2020 season as well. However, since we also experienced a freeze in April, just as the buds were about to break, it is hard to determine which event could have caused damage. You may recall that the freeze that occurred in April is what killed the majority of Colorado’s peach crop. The grapes were luckier in that they break bud later than the peaches, so only the early varieties were potentially compromised, and to a much lesser degree than the peaches.

Just as some of us wish we could fast forward through 2020, this season was the earliest season on record for grapes in the last 20 years. This can largely be attributed to the hot summer we experienced where it felt as if it didn’t drop below 100 degrees for two months straight. I had forgotten what 80 degrees felt like, but thankfully I have recently been reminded 😊.

As icing on the cake, the Pine Gulch Fire began burning 18 miles North of Grand Junction just as harvest was about to commence this year. The Grand Junction/Palisade region is home to Colorado’s largest grape growing region, and based on feedback from long-term industry members, has never experienced a fire of this magnitude in this close of proximity before. Smoke from nearby wildfires has the potential to cause smoke taint in grapes and wine resulting in off flavors and aromas. Luckily, preliminary results have shown that samples from the Grand Valley are below the threshold of concern for smoke taint. We (CSU and Western Colorado Community College) are collecting data from all across the Grand Valley to better understand how smoke taint can be prevented and/or managed in the future.

Colorado grape growers are used to facing the many challenges that come with growing grapes in Colorado, including the cold winters, unpredictable spring and fall temperatures and extremely dry conditions. 2020 involved a few more unexpected challenges, but growers across our state rose to the occasion. Hats off to the Colorado growers and winemakers for another successful grape season. Support local & drink Colorado wine!

Adaption and innovation are key for wine, grape industry
February 7, 2021