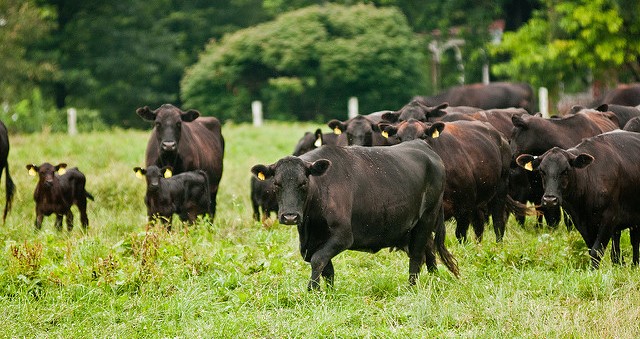 The Convention kicked off on Friday, Nov. 3 with the National Angus Tour, hosted by the Texas Angus Association. Almost 450 attendees headed to a pair of unique operations in the heart of Texas. (U.S. Department of Agriculture, Flickr/Creative Commons)

FORT WORTH, Texas — With almost 2,500 attendees, the three-day 2017 Angus Convention was a resounding success. The American Angus Association® celebrated a year full of progress and innovation, including two ground-breaking announcements during convention.

Allen Moczygemba, Association CEO, announced the acquisition of Verified Beef and its Reputation Feeder Cattle® program during the Opening General Session on Saturday, Nov. 4. The deal is a pivotal decision that will grow the value and relevance of the Angus breed today and in the future. Then, the Association introduced a new genomic profile, Angus GS™, which offers breeders an affordable tool to empower genomic selection. The forward-thinking Angus Genetics Inc. team developed the tool specifically for Angus cattle and designed it to genotype the whole herd, not just bulls.

“This year’s Angus Convention was a tremendous success thanks to our dedicated membership and talented staff,” Moczygemba said. “It was truly a monumental year of innovation and progress for the Association and will set up 2018 to be an even more successful year. The Angus breed enjoys a leadership position today because of the collective efforts of producers, industry partners and Association supporters.”

The Convention kicked off on Friday, Nov. 3 with the National Angus Tour, hosted by the Texas Angus Association. Almost 450 attendees headed to a pair of unique operations in the heart of Texas. Hoofstock Genetics was first on the list, welcoming seven buses packed with Angus enthusiasts eager to learn more about the ET and IVF services Hoofstock offers. The second stop, Wilks Ranch, served up a hearty lunch and displayed Angus cattle from breeders across the state.

Meanwhile, the Beef Blitz Product Tour hosted by Certified Angus Beef® took 40 attendees on a tour from packer to plate. The bus departed for a tour at Buckhead Dallas, an industry leading protein supplier that stocks one of the largest inventories of Certified Angus Beef brand in the U.S. Then, the tour headed to Silver Fox, a traditional steakhouse in Fort Worth. After lunch, the tour headed east to Brookshire’s Retail Store for their final tour.

The 2017 Convention was a true educational experience. Attendees had the opportunity to attend workshops, demonstrations and the one-of-a-kind trade show. Speakers included Randy Blach, CEO of CattleFax; Dr. Lowell Catlett, a futurist and retired Regents Professor at New Mexico State University; Edd Hendee, owner and operator of the renowned Houston-based Taste of Texas restaurant; and other industry leaders.

The highly anticipated Awards Recognition Breakfast highlighted some of the Association’s best and brightest. Award winners are:

Rounding out the Convention was the 134th Annual Convention of Delegates. Delegates representing 40 states and the District of Columbia elected five directors.

The 2017 Angus Convention wouldn’t be possible without the support of our generous sponsors. Thank you to:

Mark your calendars for the 2018 Angus Convention, Nov. 3-5 in Columbus, Ohio. We’ll be celebrating the 40th Anniversary of Certified Angus Beef in the state where it all began. Registration and lodging reservations open July 1, 2018. For more details about this year’s Convention, visit AngusConvention.com.